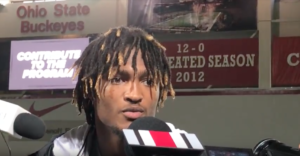 After missing his freshman season due to injury and rotating with Damon Arnette, Jeffrey Okudah and Kendall Sheffield at cornerback as a redshirt freshman, Wade was left hungry for more.

Although the return of both Arnette and Okudah does not bode well for his playing time, Wade, who led the Buckeyes with three interceptions last season, is confident in the group as a whole.

Ohio State picked off 11 passes a season ago, but only nine were by defensive backs. In fact, just six of the interceptions were made by cornerbacks, giving Wade half of the corners’ picks.

“We’re playing fast,” Wade said. “That’s the point of football, you want to play fast. You don’t want to be timid, be thinking everywhere, so everybody’s been playing fast.”

Wade (6-1, 194) showed that he is far from timid as a redshirt freshman, delivering numerous hard hits, including one thunderous boom that forced a fumble against Minnesota.

While it is likely Wade’s aggression will be viewed favorably by Hafley, the secondary coach has already made an impression on the Jacksonville, Fla., native.

“I love Coach Hafley,” Wade said. “He teaches technique. He’s hard on you, but everybody makes mistakes. And he understands football really well.”

Hafley has an abundance of experience, especially for a coach who just turned 40 on April 4. After spending 11 years coaching among the college ranks, Hafley spent the past seven seasons in the NFL.

Hafley most recently coached for the 49ers, where he earned high praise for his preparation from All-Pro cornerback Richard Sherman. The elite corner praised Hafley’s ability to make the game plan sound simple so that everyone understood and the secondary was in sync.

In addition to providing clarity to the secondary, Hafley emphasized the importance of versatility. He said having the defensive backs understand each position allows for more depth and gives the team the opportunity to have the best players on the field.

“What I think is best for Shaun is to learn how to play inside, whether you call it a safety or a nickel,” Hafley said. “That’s invaluable for him. So I want him to be able to play outside, play corner; inside, play nickel; have the ability to drop back.”

Wade, a Jacksonville (Fla.) Trinity Christian Academy product, came to Columbus as one of the most highly touted recruits in the 2017 class, ranking as the No. 2 corner and No. 17 overall prospect in the country, per 247Sports Composite.

The former five-star recruit is talented, but where he fits into the Buckeye defense remains to be seen. Wade was asked which position is the best fit for him, and gave an honest answer that might just be music to Hafley’s ears.

“Really I can’t tell you,” Wade said. “I just want to play football, for real. Whatever they need me at, I’m going to play.”