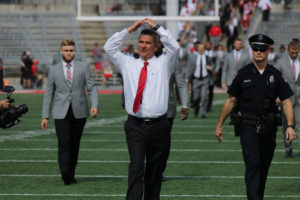 Ohio State head coach Urban Meyer met with the media Wednesday night for the final time before the No. 10 Buckeyes take on No. 18 Michigan State on Saturday in East Lansing, Mich.

The Buckeyes are 8-1 on the season and hold a 5-1 mark in Big Ten play while they are looking to boost their playoff hopes with a strong showing against the Spartans. Michigan State, on the other hand, is looking to avenge a 48-3 loss to Ohio State from a year ago.