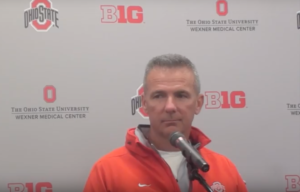 After a week off, Urban Meyer returned to his usual spot at the podium at the Woody Hayes Athletic Center to preview Ohio State’s upcoming game against Nebraska.

The Huskers have won two in a row after dropping their first six games of the season and can still become bowl eligible if they win out.

What follows is a recap of Meyer’s most notable comments from his Monday appearance in front of the media.