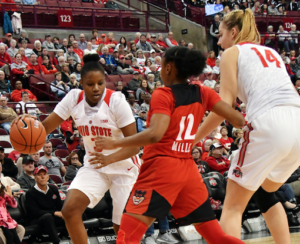 The freshman duo of forward Dorka Juhasz (18 points) and guard Janai Crooms (10 points) combined for 28 points while fifth-year seniors Makayla Waterman and Carly Santoro added 12 apiece, but the Ohio State women’s basketball team was unable to pull off its upset attempt Saturday at top-10 opponent Maryland, where the Buckeyes dropped a 75-69 final to the Terrapins.

Before its home crowd of 6,731 at XFINITY Center in College Park, Md., No. 4 UMD (13-1, 2-1 Big Ten) held off OSU (4-8, 0-3) down the stretch with an 18-11 advantage through the final 10 minutes. Nine of Maryland’s points in the fourth quarter came from freshman guard Taylor Mikesell (13 points), who with junior forward Stephanie Jones (16 points) and junior guard Kaila Charles (game-high 24 points) led the Terrapins as double-digit scorers.

Ohio State, which collectively shot 46.4 percent (26 for 56) from the field and 35.0 percent (7 for 20) from long range, opened up the first quarter shooting 53.8 percent (7 for 13) from the floor and kept pace with Maryland for its 20-19 deficit. The Buckeyes trailed the Terrapins 43-36 at halftime, following a 7-0 UMD run against OSU in the final 34 seconds that started on Jones’ layup and ended on sophomore guard Channise Lewis’ three free throws with 10 ticks left.

The third quarter, though, Ohio State started strong with a 7-0 spurt of its own to tie the score at 47 apiece into the 7:02 mark after graduate guard Carmen Grande’s triple followed Juhasz’s layup and Santoro’s free throws. The Buckeyes led 58-57 into the fourth quarter, scoring the final frame’s first points on Crooms’ midrange jumper at the 8:52 mark before the back-and-forth battle down the stretch ensued.

OSU last led 62-61 on graduate guard Najah Queenland’s layup with 5:25 left in the ballgame, trading buckets on both sides before a tie at 66 apiece occurred into the 4:08 mark after Juhasz’s layup. Ohio State trailed 70-69 with 2:12 on Santoro’s second make from deep, but Maryland closed out the last 1:17 on a 5-0 run — five free throws between Charles and Mikesell — to take the 75-69 triumph.

Ohio State returns to action Thursday at Value City Arena in Columbus with a 6 p.m. ET start on Big Ten Network against Indiana (13-1, 2-0).