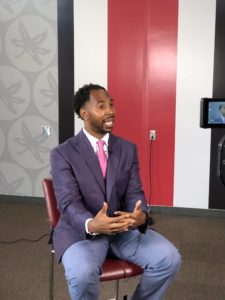 One of the most significant branches off of the Gene Smith tree is headed out to the West Coast. Former Ohio State deputy athletic director Martin Jarmond was officially hired by UCLA on May 16, three years removed from his departure from Columbus in 2017.

Jarmond left Ohio State to take over as the athletic director at Boston College, a role he filled through the past three years. During his time with BC, he played a major role in the hiring of former Ohio State defensive coordinator Jeff Hafley, thanks partially to his ties in Columbus.

Yahoo’s Pete Thamel broke the news, stating that BC fought hard to attempt to keep Jarmond in town.

“BC made a strong push to keep Jarmond the past 48 hours after UCLA’s interest became clear the past few days,” Thamel reported.”BC valued Jarmond’s performance and the way he’d modernized the athletic department after arriving at BC as the youngest athletic director in the Power Five.

“Jarmond will replace Dan Guerrero, who is retiring after nearly 18 years of service in Westwood. Jarmond beat out Penn’s Grace Calhoun and UNLV athletic director Desiree Reed-Francois for the job.”

Jarmond spent eight years with Ohio State, from 2009-2017. He was hired originally as the associate athletic director for development and rose in the ranks, all the way to second-in-command prior to his departure. Prior to his time in Columbus, Jarmond was a two-time captain for the basketball team at University of North Carolina at Wilmington, received his master’s degree in sports administration from Ohio University, and worked as assistant athletics director for development at Michigan State.

“Martin is one of the best administrators I have ever worked with,” said Smith. “His leadership skills are exceptional. It has been a tremendous honor working with him and watching him develop into a premier athletic administrator. His contributions to The Ohio State University have been significant, and he will be missed.”