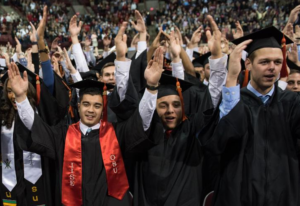 On Sunday, Aug. 9, 27 current and former Ohio State student-athletes will receive their degrees from Ohio State at a virtual commencement ceremony at 2 p.m.

Former Ohio State men’s basketball standout Michael Redd will give the commencement address. The pre-ceremony video of graduates and university leaders begins at 1:30 p.m., and will be online HERE.

Among the 2020 summer graduates is standout Buckeye cornerback Shaun Wade, who earned third-team All-Big Ten honors as a redshirt sophomore last season. Senior outside linebacker Baron Browning is also a part of the graduating class.

Kyle Young, a senior forward for the men’s basketball team, will graduate as well. The Canton, Ohio, native received Academic All-Big Ten honors and was named to the 2019-20 National Association of Basketball Coaches (NABC) Honors Court for academic excellence.

There were multiple Olympic sport standouts who will graduate Aug. 9 as well, including Sammy Stone of the field hockey program. Stone is a three-time member of the National Field Hockey Coaches Association National Academic Squad.

The summer  class of 2020 also includes three Buckeyes who returned to Ohio State to finish their degrees through the athletics department’s degree completion program . Trevor Thompson of the men’s basketball team, as well as Kelvin Bell and Michael Bennett from the football program are set to receive their degrees.

The 27 student-athletes graduating this summer join the 231 who earned their degrees in autumn/spring.

Ohio State shared a note on why the commencement is to be done virtually in light of COVID-19.

In light of restrictions on large public gatherings at this time, Ohio State will host a virtual commencement ceremony on Sunday, August 9, beginning at 2 p.m. This virtual event in no way limits or excludes a future live commencement ceremony. The university will plan and hold such a celebration for members of the summer Class of 2020, their families and guests at a time that is both safe and practical. The Class of 2020 will be actively included in this process.

Thank you for your continued support and understanding.