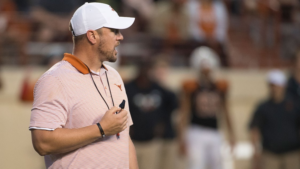 “It is one of, if not the greatest games in college football,” Herman said on the Oklahoma-Texas showdown. “I’ve been a part of some big ones, but this one takes the cake.”

Herman on the Red River Rivalry: This is one of, if not the greatest games in college football.

Herman has experienced Ohio State-Michigan, but he says the Red River Rivalry takes the cake.

Oklahoma head coach Lincoln Riley, though without the experience of “The Game,” had the same thoughts as his counterpart.

The wins have been harder to come by in his time with the Longhorns, going 1-2 thus far against the Sooners, including a 39-27 loss in the Big 12 Championship.

The No. 11 Longhorns take on No. 6 Oklahoma at noon on Saturday.