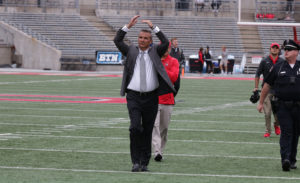 Following the announcement of Urban Meyer’s retirement and subsequent Rose Bowl victory, BSB caught up with some people who are very familiar with Meyer and the Ohio State football program for their insight into how he will be remembered.

Three-time Big Ten champion quarterback for Ohio State in the 1970s. (Green spelled his name with an “e” on the end during his playing days.)

On Meyer’s legacy: “Urban’s just a legend. Love him, hate to see him go, but see why he has to go. But just cementing his legacy with Ohio State … I went up to the Rose Bowl just to witness his last game, so, very heartfelt for me. That was a milestone for me. Winning that Rose Bowl game, seeing Urban get the joy and all the accolades that he received after the game was just awesome.

A memory of Meyer: “Personally, I’m very lucky because Archie Griffin was Urban’s favorite player, so he had to see me if he loved Archie. When I met Urban, he got into a quarterback position and started running the option – he was trying to emulate me. So we just started laughing and hugged, it was just a great feeling. He made me feel like a million dollars.”