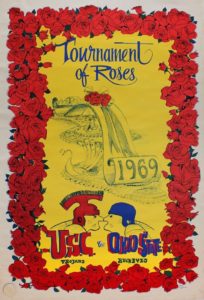 With the return of football up in the air, now serves as a perfect time for reflection on the history of football, and the strategic evolution of the game. To do that, the film study will be spending the offseason looking back at classic Ohio State games. Today’s film study revolves around the 1969 Rose Bowl, a 27-16 win for Ohio State’s super sophomores over USC. Graphics via the wonderful FootballXOs.com. There’s no 1968 Ohio State playbook available online unfortunately, so we’re going to go off of the closest thing: the 1973 defensive playbook, which will work just fine for the purposes of this article.

It’s hard to quantify just how quickly football was evolving in the 60s.

After decades of offense revolving largely around the same concepts, Tom Nugent’s I-formation finally took hold in the mid 50s and into the early 60s, after he found success at Virginia Military Institute and Florida State. Nugent’s theory of offense was, essentially, that a whole lot more could be done if there was one primary ball carrier, rather than two or three, and if that primary ball carrier had more help in front of him, rather than to his side.

Now, Nugent didn’t technically invent the I-formation, but he did modify it into something usable for everybody, and into something that worked really well.

It worked, in large part, as a foil to the T-formation that had dominated the 50s, and that Ohio state head coach Woody Hayes relied on. The T-formation took its strength from misdirection, and used that misdirection to make up for the lack of versatility in the formation. The I-form, while still certainly more conservative than what football fans are used to now, offered more room for versatility and creativity than just about anything else available at the time.

Nugent’s success, specifically at an upstart FSU program, helped inspire the spread of his offense. Don Coryell, another military school coach in the 50s, picked up the I-formation as well, adding into it a lethal passing game during his time at San Diego State from 1961-1972, partially because he thought it was a good idea, but more so because he had a bunch of good receivers, and not much else.

“Finally we decided it’s crazy that we can win games by throwing the ball without the best personnel,” Coryell said. “So we threw the hell out of the ball and won some games. When we started doing that, we were like 55–5–1.”

Before Coryell made his way to San Diego, however, he made a one-year stop at the school that most credit with the proliferation of the I-formation, and the school that rode the system to four national titles in the 60s and 70s, while churning out some of the most devastating and talented halfbacks in college football history: Southern California.

Coryell spent just a year at as an assistant at USC, helping with the offense in 1960, head coach John McKay’s first season. It took a few years to catch hold, but even after Coryell was gone, McKay was able to tune the I-form into a giant slayer, before building a giant of his own.

While McKay built his I-form offense, Hayes stayed reliant on that T-formation that had gotten him so far. It wasn’t until offensive coordinator George Chaump arrived in Columbus that Hayes even considered a shift, and even then, it took Chaump being fired and immediately rehired, along with a borderline staff mutiny to force Hayes’ hand prior to the 1968 season.

Defensively, however, Hayes was far less resistant to change, primarily because he didn’t enjoy giving up points, and a defensive coach unwilling to change is a defensive coach that’s going to give up a lot of points. While Hayes’s offense looked pretty similar at the end of the 60s, his defense was faster, stronger, and more adept to handle evolving offenses. In more concise terms, it was ready for a giant, and a giant it got in the 1969 Rose Bowl against McKay’s Trojans.

The two coaches were just about exact opposites, both in personality and in offensive scheme. As was common with Hayes, they didn’t get along particularly well, and weren’t very quiet about it. The Associated Press described their relationship as “match of cold computer against boiling blood.” McKay shared his own thoughts on Hayes.

“Every time Woody Hayes brings Ohio State out for the Rose Bowl, he throws a security wrap around his players that would impress the FBI,” McKay wrote in his 1974 autobiography. “What the hell are these kids going to see or say that will hurt their team? Coming to the Rose Bowl and California may be a once-in-a-lifetime experience for them. They should have more freedom to enjoy it.”

There was one place, however, where Hayes and McKay gelled perfectly: when USC’s offense was on the field. Hayes had worked tirelessly to develop a defense to stop the I-form after several matchups with USC throughout the 1960s, and came out of the decade with a finely tuned scheme designed perfectly to counter the speed and power of McKay’s offense: the 5-2 defense. The 5-2 defense wasn’t Hayes’ creation, nor was it a new invention, but it gave Ohio State exactly what it needed to answer USC’s offense.

Primarily, it gave the Buckeyes quite a bit of size in the box, in an attempt to gum up running lanes and prevent any sort of efficiency in running up the middle. 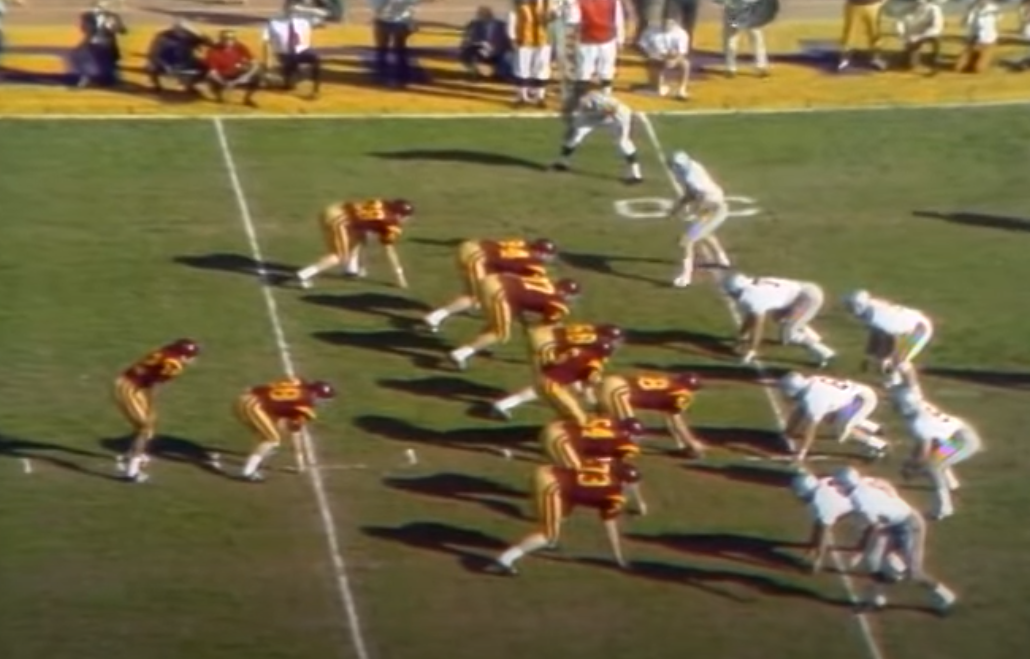 This was primarily a numbers game, as all football is, because Ohio State needed to match USC’s five offensive linemen, along with a fullback on every play, and at least one tight end on most plays. The five linemen up front for the defense helped to balance out the Trojan offensive line, with the two linebackers serving in a crucial role of either finding a gap to make a play or clogging up a gap so that the offense can’t make a play. Behind those seven, Ohio State had a cornerback, a safety, and two hybrid rover types that could be used for whatever was used. Past the 11 defenders, Ohio State also made a point of focusing on the open part of the field, forcing opponents to settle for short gains. 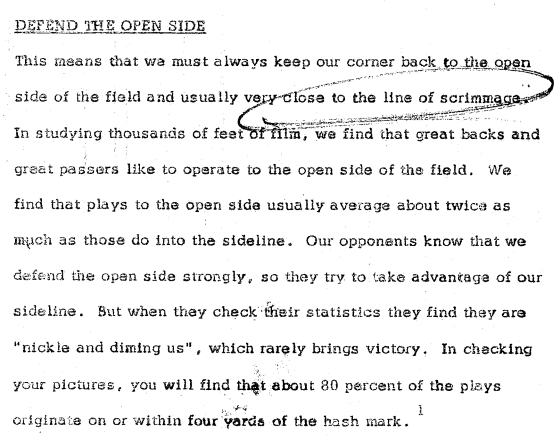 In its base form, the defense was designed to fill every gap that an offense would want to run to, while trusting the four backs to keep things locked down if disaster hits and the opponents decides to pass. The ‘Mike’ linebacker was responsible for the A gaps and expected to take care of the center. The tackles lined up on the inside shoulder of the offensive tackles and took care of the B gaps. C gap responsibilities were based on where the tight end up lined up, with the free end (no tight end) taking one C gap and the tight end-side linebacker taking the other, while the other end handled the D gap outside of the tight end. That leaves one linebacker for roaming or coverage.

Obviously this can and will change based on the play call, but in 5-2 Eagle, which Ohio State liked quite a bit, those were the assignments.

You get a pretty good idea of what this actually looks like on the first play of the game, with Ohio State creating quite a bit of chaos up front but USC ultimately winning the battle and creating some room for star halfback O.J. Simpson on a simple off-tackle run.

For the most part in this game however, Ohio State’s 5-2 defense worked like a charm to answer Simpson and the USC offense.

Of course, it helps to have players like Jim Stillwagon, seen playing the ‘Mike’ here, who can completely blow up a play. USC runs fullback Dan Scott into the A gap, with Simpson serving as a toss decoy, but the decoy doesn’t matter, because Stillwagon is already in the backfield. This also plays into that approach to covering the open part of the field. Ohio State brings Jack Tatum on a blitz from that open side, essentially funneling the Trojans into a run to that short field, which Ohio State has snuffed out from the beginning.

The two mostly held in stalemate in the running game, with Ohio State stuffing plenty of runs but Simpson through the defense enough to give USC an early lead and keep the Trojans in the game late. There is one more run I would like to look at briefly, however. There’s no scheme reason for it, there’s no reason to try to explain why it happened and I don’t have much to say about it, other than “goodness, O.J. was so, so good.”

Sometimes, you can call a perfect play, put everyone in the right place, and then someone will do this. Welcome to football.

Back to the film study, the difference of the game was made in the passing game, not usually a strength of the 5-2 defense, but one that Ohio State turned into a strength through the use of creative pressure.

The Buckeyes bring six rushers here, looking to overwhelm USC’s five offensive linemen. It works, with an unmarked rusher coming off the edge to force Steve Sogge up in the pocket, directly into Paul Schmidlin, who worked his way through the guard. Behind these six, Ohio State was just in a pretty basic Cover 3 shell, as it usually was in passing situations, but the pressure is intense enough to completely blow up the play.

In obvious passing situations, Ohio State generally turned to a more conservative approach, dropping one of the ends into that zone to help account for USC’s four receiver look, while trusting the four linemen to get pressure. In this case they do, but for the most part, on passing downs, Ohio State was hoping that it could hold the zone long enough that USC’s speed advantage wouldn’t be able to take hold and give Sogge someone to throw to. He went 19-of-30 passing on the day for 189 yards and a score, which certainly isn’t exactly what Ohio State wanted, but was still enough to get the win.

As the game went on, USC’s speed advantage dwindled, and Ohio State’s physicality started to wear on the Trojans. Fatigue set in, and three fumbles severely hampered USC’s ability to move the football consistently. Down in the fourth quarter, this Simpson fumble all but sealed the win for the Buckeyes.

While Hayes had finally compromised on his offense and adapted his defense around a faster, fresher opponent, it was Ohio State’s ability to grind it out that led to the win, 27-16, and to a national title.