Tate Getting Set To Compete In NBA Summer League 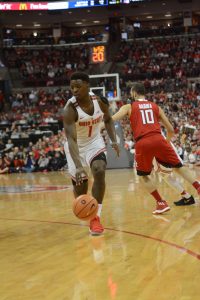 Jae’Sean Tate did not get selected in the 2018 NBA draft on June 21 but still has a chance to make his way into the league.

The former Ohio State forward was signed to the Milwaukee Bucks’ summer league roster shortly after the draft and will now try to earn on a spot on the team in the NBA Summer League, which gets underway Friday and lasts until July 17 in Las Vegas.

A native of Pickerington, Ohio, Tate ended his four-year run as a Buckeye in March. He played in a total of 129 games, including 110 starts, and averaged 11.7 points and 6.0 rebounds per contest for his career. The heart and soul of the Buckeyes – particularly in 2017-18 – Tate earned second-team All-Big Ten honors in his senior year as he helped lead Ohio State to its first NCAA Tournament appearance since 2015.

Tate worked out for a handful of NBA teams prior to the draft, including the Chicago Bulls, Indiana Pacers, Milwaukee and the Utah Jazz. To see Tate go through this portion of the evaluation process with some organizations made current Ohio State point guard C.J. Jackson ecstatic.

“It really brought joy to me because he works so hard, and I don’t think people understand how hard he works just on his body, on what he puts in his body, on the court, lifting weights,” Jackson said of his former teammate on June 13. “Once he started getting these couple workouts it just made me so happy.”

Another one of Tate’s former teammates echoed similar sentiments. Musa Jallow, who will be a sophomore for OSU in 2018-19, said there’s no mistaking what Tate would bring to an NBA squad.

“A hard worker and a great leader,” Jallow said. “He’s going to give you everything he has every single day. It doesn’t matter whether it’s open gym and he’s playing middle schoolers or it’s in the NBA, he’s going to give everything he has. He has that strong edge to him. If you tell him he’s got to work on something, he’ll put forth full, 100 percent effort to work on it and give it his best shot.”