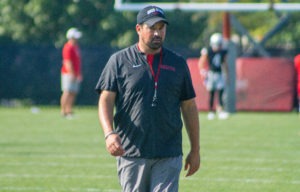 There’s a new transfer quarterback that has never started a collegiate game. There’s a defense that struggled mightily throughout much of the previous season, and a mostly-new coordinator staff working to improve it.

But Day, with everything else going on, has a few major priorities heading into the opening matchup against Florida Atlantic.

“The first thing is tackling. We have to tackle. We have to take care of the football. And we have to block,” Day said. “Those are the three things that we’re really focused on going into this game. Playing a clean game is very, very important.”

Tackling was a concern for Ohio State at times a season ago, with missed tackles leading to various big plays, including some back-breaking ones in the team’s only loss to Purdue.

Going deeper to solve this problem, Day said he looked to a former Ohio State coaches’ mentality to bring an added level of grit to the defensive side of the ball.

“I think so much of that comes with being tough. We talk about it all along how tough we have to be,” Day said. “I watched the documentary after the game the other night. Woody Hayes was talking about toughness for like 15 minutes. It was really cool because that’s the essence of Ohio State.

“And we hit it right on the head with this thing: It’s all about toughness. And tackling is being tough and ball security is toughness. It’s toughness locking on to the ball and understanding how important that ball is.”

These major bullet points have been the keys in camp, but Day said it will take some “new faces” on the schedule to really see how much the emphasis has paid off.

“You play against the same offense and defense for a long period of time. It gets a little stale just in terms of the same look over and over again. Now you get to see different schemes against different players, find out what your matchups look like against other people and figure out where we get better,” he said. “It’s a journey, not a finished product by any stretch of the imagination.”

Going into a season with the focus being on finishing tackles and not turning the ball over is not an uncommon way to think.

But for Day, in his first season as Ohio State coach, it might be important to start by looking at the basics before his team has even played a game.