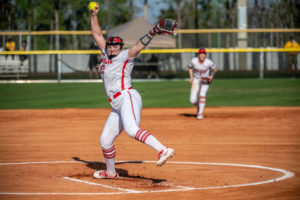 Editor’s Note: This story was featured originally in the most recent print issue of BSB, which means that the stats including in the story have not been updated to reflect Ohio State’s most recent games. For more like it, be sure to sign up for four free issues of the print edition of Buckeye Sports Bulletin, no card required. You can sign up at the link here: http://www.buckeyesports.com/subscribe-4issue-trial/, or call at 614-486-2202.

Ohio State softball coach Kelly Kovach Schoenly started her April 14 interview with BSB raving about freshman pitcher Allison Smith and talking about how glad she was that Smith was getting recognized for the opening season that she’s having in Columbus. She closed it with a story, unprompted, about Smith’s ability to keep things in perspective and move forward, even when the game isn’t going her way.

“OK, so we’re playing this team, the best team in our conference at the time (Northwestern on March 14), back when we were in Florida,” Schoenly said. “Runners on first and second, and she’s facing a batter. She gives up a double, they end up going ahead, and it was a big moment because if she gets the batter out, the game’s over. And I’m disappointed, obviously. I was worried that I called the wrong pitch and should have called something else, because I call the pitches for her.

“I went up to her and I said, ‘You know, I think I called the wrong pitch,’ to try to take some of the heat off of her. And she says to me, ‘Coach, no. That’s the pitch I wanted to throw. Nine out of 10 times, I’m going to beat that girl with that pitch. She did it the one time, and unfortunately there were runners all over. I’ll get her the next time.’ And I’m just thinking, ‘How does she have so much perspective when I’m beating myself up about this?’

“After, I called my dad – he’s a coach as well – I call him right away and I was like, ‘Dad, this girl’s a winner. She gets it.’ The fact that she had that perspective as an 18-year-old and looked at it way better than me as a coach, second-guessing myself, at my age and with my experience – there’s just something special there. Her parents have done a great job of the way that she frames the game. That’s a big deal for a freshman.”

Although coaches are always happy to praise their players, especially young ones who are catching on earlier than expected, Schoenly’s sentiment – about Smith being special, being a winner – is an easy one to grasp. The freshman from Champion, Ohio, just seems to have that impact on people, be it her coaches, the foremost of whom described her as a foundational piece for the program, or her teammates, who have welcomed her with open arms from the day that she walked on campus.

Even though she’s suited up for the Buckeyes only 19 times in her young career, she’s already starting to make those who believed in her look clairvoyant. As a starting pitcher in her first season as a Buckeye, Smith has racked up an impressive 3.18 ERA, tallied 87 strikeouts to just 42 walks and holds a 7-9 record for the 14-13 Buckeyes, who are jostling for space in the jam-packed Big Ten.

None of this is new to her, even if it’s her first time pitching in the Big Ten and donning the scarlet and gray. Smith has been dominant on the diamond for years, lighting up the Ohio high school softball and club team levels all the way back to seventh grade, when she first started to realize that she could be playing the sport at a high level for a long time.

“I hadn’t yet played with (coach) Lee Pyles, and he was like, ‘Hey you should come play for me,’ and he actually brought the Indiana coach to watch one of my games,” Smith told BSB. “He said that the Indiana coach was really interested, so I went to my first camp (at Indiana) going into seventh grade, and that’s when I got my first offer.”

Ohio State realized it then too, as it watched Smith tear through the club ranks and ring up batter after batter from the circle with the kind of confidence – and velocity – that you would expect from a seasoned veteran, not a middle schooler.

“I would say in like seventh grade,” Schoenly said when asked about when Ohio State knew Smith could play at the next level. “Not that I was recruiting her, I just noticed her. She was a big, strong girl. She was different than the rest of the kids, and you could see that right away. She came to camp, I think she was in seventh or eighth grade with her little local team, and they just had a blast and she was having so much fun. She didn’t even realize that we were taking her that seriously, but we were.”

The Buckeyes were so sold that they accepted a commitment from her all the way back in her freshman year of high school. That was before she led Champion to three state titles, before she racked up a state-record 51 home runs, and before her amazingly ascendant junior season: 16-0 as a pitcher with a 0.14 ERA and 215 strikeouts. It was that belief that the Buckeye staff had and a trip to Columbus that sold Smith on suiting up for the home-state Buckeyes, despite interest from teams all over the Midwest.

“Oh my gosh, it’s actually kind of a crazy story,” Smith said of her commitment. “I really had no idea where I wanted to go. I went to a lot of camps, I went to a lot of different live venues, but when I stepped foot onto Ohio State’s campus and I went to a football game. I said, ‘Mom, Dad, this is it.’ I was like, ‘I’m done. This is where I want to be.’

“It was a mix of the coaching staff, of the tradition, of course the campus is beautiful. And then talking to some of the girls on the team, the love they have for each other and the family environment that they all talked about – it was just everything I wanted it to be. It has every opportunity that you could want as a student-athlete.”

As previously mentioned, she caught on right away with the Buckeyes, establishing herself as both a force on the field and a positive presence in the locker room. Ohio State has an experienced roster, led by senior ace pitcher Payton Buresch, but none of those veterans had any qualms about welcoming the newbie into the fold and accepting her, not just as a rookie with much to learn, but as an equal and a teammate they could work with to improve their own game while helping her along at the same time.

“I think Payton welcomed her with open arms, which basically allowed Allison to just come in and throw,” Schoenly said. “Payton was so welcoming. It could be intimidating to have a senior and you’re a freshman with those dynamics, but Payton does a great job, along with Skylar Hayward, of just creating a culture in the bullpen where everyone can be their best and let the cream rise to the top. I think that Payton has taught Allison a lot about composure, poise, learning about opponents and paying attention to those types of things. She’s been around the block a little bit. And Allison has brought some of the fun to the bullpen and let the pressure go away for everyone else. She makes it lighthearted, even though she’s super competitive. She has a good head on her shoulders about just having some humor to it.”

Buresch has been a crucial part of the equation for the Buckeyes and for Smith in general this season. Despite her experience – Buresch entered the year with 281 2/3 college innings pitched – this is her first full year with the Buckeyes. She transferred from James Madison after 2019 and earned major time for Ohio State in 2020, but that season was canceled before it ever really got going.

That means that like Smith, Buresch is still getting used to the Big Ten and to pitching as a Buckeye. She’s taken that move in stride and is pacing the bullpen in just about every category, from wins (7) to ERA (2.09).She’s showing Smith the ropes as she goes, too.

“It’s great having somebody to look up to,” Smith said. “The way that she carries herself, the way that she’s disciplined, the way that she works hard, everything about her is something that I want to do when I’m a senior for the freshmen. The bullpen goes so much better when she’s there, just because of her attitude. If you’re not throwing well, she helps lighten your mood, and that just helps you throw better. And then on top of that, she dominates. I think I’ve only seen her give up one home run. Her presence on the mound is so awesome, it’s what you want to become.”

One thing that Smith doesn’t have to learn, and the thing that’s likely most responsible for propelling her to this early collegiate success, is the mental side of the game. They say that pitchers must have short memories, and Smith has a knack for that.

“That’s a great quality for a pitcher,” Schoenly said. “One thing that I appreciate about Allison is that she lives in the facts. Something happens and she doesn’t create the story around it. It’s either, ‘Bad pitch, she hit it because it was bad,’ or ‘Good pitch, and she hit it because she was better than me,’ but she doesn’t say, ‘Oh well, that was the wrong call or this or that.’ She just lives in the facts.”

That’s not something that she just does on the mound, either. Smith lives in the moment, to the point where, when asked about her goals for the future, she said plainly that she does not know. She hasn’t thought that far ahead. In her mind, there’s no real need to. Smith says that she certainly wants to be a part of a championship team, and that it would be a “bigger accomplishment than anything (she’s) done in (her) life.”

But there’s no overarching individual goal that drives her. She wants to go out, pitch as well as she can, and do it again for as long as she can.

“I don’t think there’s a limit to what she can accomplish,” Schoenly said. “I truly believe – and, when I recruited her, we talked about this – that she could be the cornerstone of getting one of our teams to the World Series. I think that she has that competitive drive and the desire to work to get better. I think we’ve had some other pitchers that have come through here that had that ability. We have a long line of pitchers that I think could take us there. It’s just a matter of putting all the pieces together and trying not to put too much on her shoulders.”

With the kind of talent that Smith has, it’s easy to see that rinse-and-repeat model working for years to come, and Ohio State hopes it can pay off big time in the long run with what currently looks like the program’s ace of the future.

Even if Smith doesn’t want to think that far ahead.