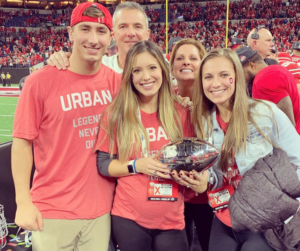 Shortly after Ohio State won its second straight Big Ten title in Indianapolis on Saturday night, Urban Meyer and his team went to the locker room to celebrate amongst themselves. His wife Shelley however, stayed out on the field and answered questions from the media.

Shelley, who was visibly emotional after Ohio State’s win over Michigan on Nov. 24, said that the season has been very trying on the Meyer family, but added that the second straight Big Ten title was something the team and family would celebrate.

“There was so much doubt and they did it, and I love it,” she said.

Amidst the success Urban Meyer has had in the last two weeks after a 62-39 win over Michigan and a 45-24 win over Northwestern in the Big Ten title game, there are reports that Meyer will be done coaching following the Rose Bowl against Washington or perhaps after the conclusion of the 2019 campaign.

When asked about her husband’s future, Shelley said Urban Meyer has been feeling better in recent weeks, but would not comment on his future as Ohio State’s head football coach.

“I can’t say anything about that because I don’t know,” she said. “I love my husband. He has always been very intense. I know no other Urban Meyer. He has been intense as long as I have known him. He is feeling good right now. Winning cures a lot of things.

“He has been feeling good the last few weeks after getting the headaches under control.”

The headaches, as a result of a cyst that has bothered Meyer for years, came into the public’s eye after Meyer briefly fell to his knees at the end of Ohio State’s 49-26 win over Indiana on Oct. 6.

Shelley was asked if she and her family, including Urban, would meet after the season to discuss his coaching future, she used a line that has been made famous around Columbus by her husband.