Shaun Wade To Return For Ohio State Against Wisconsin 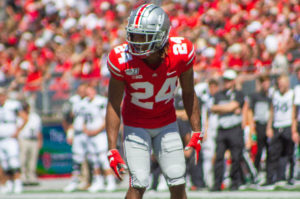 Ohio State is set to have all of its starters back for the Big Ten Championship on Saturday.

Defensive back Shaun Wade, who missed the game against Michigan, is not mentioned on the injured list ahead of the game against Wisconsin, and is named as a co-starter at cornerback with Amir Riep.

The Buckeyes appear to be the healthiest they have been all season, with no players who receive a major amount of snaps being listed as either a game-time decision or as unavailable.

Though he is not medically unavailable for the game, defensive end Jonathon Cooper is not listed on the depth chart, as he played his fourth and final game of the season against the Wolverines after deciding to take a redshirt season and return in 2020 for his fifth year.

Here is the list of players that are named as unavailable for the matchup against Wisconsin:

Ohio State has all of its starters back, including Shaun Wade, for the Big Ten Championship against Wisconsin. pic.twitter.com/LUeUUll0h4