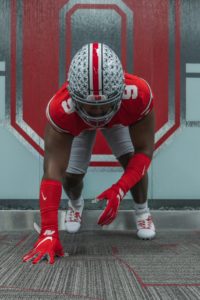 Several members of Ohio State’s top-rated 2021 recruiting class received a bump in the latest 247Sports rankings, with Streetsboro (Ohio) four-star defensive tackle Michael Hall making the biggest jump of any pledge from No. 121 to No. 59 overall.

Today's update to the Top247 rankings for the class of 2021 go HEAVY on the defensive side of the ball.

Hall, who committed to the Buckeyes in early February, is one of 14 Ohio State pledges ranked among the Top247 prospects for the class of 2021. Of those players, seven saw their stock rise while seven saw a slight drop in the 247Sports rankings, which are the recruiting services’ individual rankings and should not be confused with the composite rankings that also include input ESPN and Rivals.

Here’s how the future Buckeyes fared in 247Sports’ latest batch of rankings:

The rankings had no real impact on the composite rankings, as the Buckeyes still have four five-star commitments in Sawyer (No. 3 overall), Henderson (No. 19), Jackson (No. 21) and McCord (No. 26). Adeleye is on the verge of joining them, as well, checking in at No. 30 overall as the highest-rated four-star prospect in the country.