Secondary In For A Shake-up With Healthy Banks, Injured Proctor 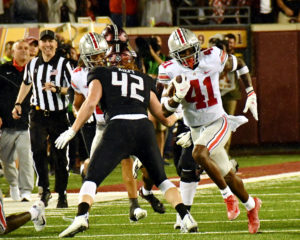 Ohio State’s secondary is gaining one veteran defensive back, and losing another – or so it seems. Ohio State head coach Ryan Day confirmed on Sept. 13 that safety Josh Proctor will miss the entirety of Ohio State’s 2021 season with a compound fracture in his right leg. A day later, the Buckeye head man also confirmed that senior cornerback Sevyn Banks, who was expected to be a starter on Ohio State’s defense but has yet to play a snap this season, is healthy enough to play and that the Buckeyes are hopeful that they “can get him on the field this week” against Tulsa.

When asked about Banks, who was not listed on either of Ohio State’s first two availability reports but has been dealing with some sort of nagging injury, Day was curt, saying that the senior’s unavailability has been exclusively tied to his injury – shooting down message board rumors to the contrary – and that Banks is healthy enough to suit up for the Buckeyes.

“At this point, he’s not too injured to play,” Day said. “He has had some injuries and he was kind of slow in preseason and everything like that, but now he’s healthy.”

In his place, the Buckeyes have found consolation in freshman Denzel Burke, who has slotted immediately into a starting role and impressed against Oregon on Sept. 11, serving as one of the few bright spots on the maligned Buckeye defense, alongside his battery mate, junior cornerback Cameron Brown – who also returned from injury recently.

“I think that he’s shown in the games what he’s shown in practice,” Day said. “I thought that they went after him a couple times downfield, and he did a really good job in that area. I think he’s got a very, very bright future. He’s like a lot of the younger guys out there, everything he’s doing is for the first time. For a young player stepping into a couple of these spots, he’s done a good job. The future’s bright with him and a bunch of the younger guys we have.”

If the Banks saga is about to come to an end – a big if, given the uncertainty around him through the opening stanza of the season – Ohio State’s next step in the secondary may be trying to find another Burke, this time in Proctor’s single-high safety spot. The Buckeyes plugged sophomore Bryson Shaw into the deep middle of the field against the Ducks, but he struggled mightily and Day sounded unconvinced on Shaw as a long-term answer in both his post-game press conference and his Sept. 14 meeting with media.

“We’re looking at all that to try to make some adjustments. Losing Josh for the whole year kind of changes some things,” Day said. “Bryson (Shaw)’s had some good snaps in there, but we’re gonna have to look at what gives us the best chance moving forward. Possibly trying some guys at different spots is things we’re looking at.”

For the Buckeyes, just finding more bodies in that safety position more prove more difficult than anything else. Proctor, Shaw and senior Marcus Hooker entered the season as Ohio State’s only true single-high safeties. Proctor is lost for the year, Shaw is struggling in the role, and Hooker didn’t exactly impress during his time at the back of the Buckeye defense in 2020.

There are options elsewhere in the secondary, though an in-season shift is a lot to ask of any player. Slot cornerback Lathan Ransom played as a deep safety in high school and could do so again in Columbus, although moving him out of the slot and replacing him with senior Marcus Williamson could bring back bad memories for the Buckeyes, who saw Williamson burned repeatedly in that role in 2020. Bullets Ronnie Hickman and Kourt Williams have safety experience as well, though Hickman is already starting as a bullet and Williams has yet to play significant minutes for the Buckeyes as he bounces back from an ACL injury.

Regardless of the pick, Day is hoping to make it as soon as possible, so that Ohio State can begin to build experience back up.

“We need experience on defense right now,” Day said. “We don’t have a lot of guys with experience, and so when you lose a guy like that, it hurts because he has played for us. When you look back there, there’s a lot of guys that haven’t.”