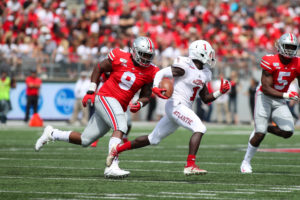 For the first four seasons of his career at Ohio State, it felt as though something was just waiting to click for Jashon Cornell. A one-time five star recruit that came to Ohio State as one of the most highly touted defensive ends in the class of 2015, Cornell couldn’t quite seem to figure it out enough during those first four seasons to earn significant playing time, let alone lock down a starting spot.

He bounced back and forth between end and tackle, the latter of which seemed to suit his frame better, but also had quite a few significant contributors ahead of him, including Dre’Mont Jones, Adolphus Washington, Jalyn Holmes, Robert Landers and DaVon Hamilton. He played in bursts in 2016, 2017 and 2018, but never really caught on, racking up just 32 tackles in 21 games over the three seasons.

Then, entering his final season, and with an opening at tackle for playing time, it finally clicked. Up to 6-3, 285 pounds, Cornell was a perfect fit for Ohio State as a pass rushing specialist tackle, and paired fantastically with Landers and Hamilton, both of whom are better suited to stuff the run while Cornell provides interior pressure to complement Chase Young and several other ends off of the edge. He played essentially the same role that Jones did during his time with Ohio State, and did it without any sort of drop off. The long term production isn’t there, but Cornell’s 2019 season is absolutely draft-worthy.

Not just because of the stats, either. Sure, Cornell had 30 tackles, 7.5 for a loss and four sacks as a redshirt senior, but that doesn’t tell the full story of his game, which is comprised of both surprising athleticism and the kind of technical skill that you would expect from a Larry Johnson deciple.

On the athleticism first, Cornell is by no means a Young-caliber freak of nature, but he can move much better than the vast majority of tackles in the class, and was actually surprisingly good in open space, usually not a strength for tackles, but something he was able to pull off pretty well.

He shows that athleticism off here, reading the halfback’s angle and getting outside quickly after his first step was towards the fake in the backfield. He manages to keep pace all the way to the sideline, and actually finished the play, tracking the halfback roughly 20 yards in the process. This obviously isn’t the kind of play that a defensive tackle will be asked to make a lot, but it shows off the kind of athletic ability that Cornell has. It’s that athleticism that led Ohio State to use him pretty much interchangeably as a run stuffing end and pass rushing tackle. He’s better at the latter, but he can do both.

As for the run stuffing that he did as a tackle, Cornell leaves some to be desired, but was still able to get the job done frequently. He doesn’t have the strength of Landers or Hamilton, and wasn’t really able to move linemen in the same way that they were, so he was less active in gumming up running lanes. He is, however, persistent and good at tracking the ball, which led to him being in on quite a few tackles, even if he was rarely the one creating the contact.

Where he really shines is here, on pass rushing downs when he can just pin his ears back and pressure the passer. He has a nice, explosive first step, and creates contact quickly, forcing the center into the pocket and forcing the quarterback to work around him. He shows off a nice spin move that he should probably use more at the next level, keep with the play, and lands an assisted sack for his efforts. There’s nothing unstoppable or elite here, but this is solid pass rushing from the interior line, which doesn’t exactly grow on trees.

He also has good hands, that, when combined with that nice first step, can help him blow back a guard if they’re not ready for the speed rush. Again, he isn’t setting the world on fire with his quickness, but his combination of pass rush moves, strength, athletic ability and technique make him pretty difficult to prepare for every play. Because he’s good at just about everything, offensive linemen really can’t take any plays off against him unless they want to be run past or pushed into their quarterback’s knees.

If Cornell is going to get drafted, that’s going to be the pitch that does it. He isn’t a star, he’s not going to be a star, but he’s good at just about everything, and that should at least get him a camp offer, if not a late pick or UDFA interest. He probably projects to a pass rushing situational specialist at the next level, but that’s a role that he filled admirably at Ohio State, and it’s a role that several NFL teams are in need of filling.