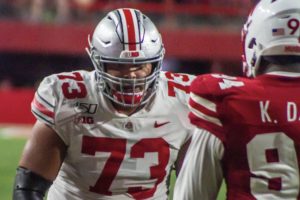 Ohio State didn’t get a whole lot of time to know Jonah Jackson. The Pennsylvania native spent just a year with the Buckeyes after four seasons in Piscataway with Rutgers, relocating to compete for a national title and earn the eyes of scouts in his final season of college football. Ohio State needed an experienced guard to fill a hole on the line, and Jackson needed a higher pedestal. The fit made sense for both sides, worked about as well as it possibly could have, and now Jackson looks to be a surefire draft pick.

Still, there’s a cloud of mystery around Jackson as a player, despite starting 16 games at Rutgers prior to his time with OSU, and being named an honorable mention All-Big Ten selection in 2018, in large part because of where he was. Rutgers was terrible, and there may not be a more difficult position to thrive on a terrible team than on the offensive line. Individual effort only matters so much up front, and that especially impacted Jackson, who is defined as a player by his ability to blow up defenders.

At Ohio State, that was finally able to shine through, but the nature of his short tenure in Columbus makes Jackson a bit of a tricky evaluation. He has the opposite problem in Columbus that he did at his previous spot, because on Ohio State’s line, Jackson was surrounded by what could easily be three future first-round picks in Thayer Munford, Wyatt Davis and Josh Myers, and a fourth likely draft pick in this year’s draft with Branden Bowen.

However, Jackson’s game was never really muddled in 2019, despite all that talent around him. He made plays consistently, was rarely beaten, and even brought a race for generating the most knockdowns – formerly known as pancakes – to the offensive line room, a race that he won. Jackson isn’t projected as a first-round pick, nor does he possess the athleticism or technical ability to merit that kind of fanfare, but he was pretty obviously the cornerstone of that line.

“You watch that film and all those other guys said, ‘Oh, that’s how you’re supposed to do it,’” offensive line coach Greg Studrawa said of Jackson after his first game with Ohio State. “The impact he had on that room was unbelievable in one game.”

“He’s a man’s man,” head coach Ryan Day said. “This is a guy who has a lot of respect from the guys. It’s not easy to walk into Ohio State now. These guys are close, and so far he’s done a really good job.”

What makes Jackson’s 2019 more impressive is, as alluded to, he did it without any obvious athletic or technical advantage. He has good size, at 6-3, 306 pounds, but he didn’t test particularly well in anything else. His 28 reps on the bench press is good, but anything that required agility or rapid movement put Jackson near the bottom of the list of guards. That showed up on the field too, where Jackson consistently played too high, in large part because of a lack of flexibility.

It all adds to the mystique of Jackson. Despite all of his athletic flaws, he was still one of the most dominant linemen in the Big Ten, and a player that was constantly lauded for his effort and ability to drive defenders back. How did he do that without particularly good measurables, and with a leverage disadvantage on nearly every play?

To put it simply, Jackson’s strength is his intelligence. He’s able to think his way out of those disadvantages, and adapt to whatever a defense is throwing at him on the fly.

Take the awareness that he flashes here as an example. Jackson is serving as the second level blocker on this sweep, and he doesn’t waste any time getting there, clearing the first level just a couple steps into the play with a wide first step, before getting downfield and opening up his hips to the defense. He has the patience and vision once into open space to find the safety coming in, and then he shows off the strength to completely flatten a sprinting grown man, despite being almost completely standing still before he absorbs the contact. That’s intelligence before the contact, and, frankly, grown man strength at the collision point.

It’s bizarre, but that’s Jackson’s game. he should have played through the contact there, but he slowed down before making the block. Usually, that’s going to get a lineman blown up, or at least beaten, because he’s essentially volunteering to be knocked off balance. Jackson’s core strength and understanding of his own body is so good that he knows he can get away with it. Jackson could be taught the correct way to do this, but he really doesn’t need to know it, because his way works just fine.

This is a similar situation. Jackson gets too high too quickly in blocking this tackle, but he does a perfect job of getting onto his outside shoulder to rotate him inside and clear the gap for the halfback, and from that contact, he’s again able to use his strength to move that defender, even if his technique isn’t exactly something you would put on a tutorial. His intelligence and strength lets him make plays that he shouldn’t be able to make, or that he should be able to get away with.

The obvious answer is a zone running scheme, because that’s what he did at Ohio State and he’s good at it, but honestly, Jackson’s best fit may be in something that requires less lateral movement. Zone blocking requires reach blocks, which means a quick first step that Jackson doesn’t really have. He made it work, but he may be more comfortable working downhill and using his strength without having to move a bunch beforehand. That could also mean that he would work at center, and that’s certainly something that his future team should look into.

As for team fit, Jackson would work best as an immediate leader and contributor on a young team, or a team that is in need of a replacement level guard from day one while it develops someone with a higher ceiling. That’s not worth an early round pick, but for a team like Cleveland, Miami or Cincinnati that is just in need of bodies up front, Jackson would be able to play right away and do so at a serviceable level.

Because of his athletic and technical limitations, replacement level starter to elite backup is probably the ceiling for Jackson, but that’s still worth drafting in the later rounds for a lot of teams. Jackson’s niche is going to be attractive for someone on day three, and he should be able to contribute for whichever team falls in love with him, even if he does it in his own strange way.