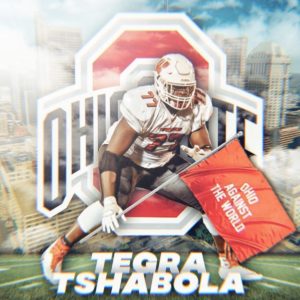 Ryan Day has made his approach to recruiting abundantly clear through his first 15 months on the job with Ohio State.

In the class of 2020, Day’s first full class as head coach, Ohio State finished nearly all of its recruiting far ahead of the early signing period in December, locking up commitments from just about every major target and focusing on just a few players entering the final stretch.

That allowed the Buckeyes to get a significant head start on the class of 2021, which has led directly to Ohio State’s 17 commitments before May rolls around, with an excellent chance at being nearly done with the class before football season starts (if it starts) in the fall. Getting ahead of schedule, finishing classes early and jumping ahead to the next group has worked well for Day so far, and right now, he’s showing no signs of stopping the Ohio State recruiting machine, as yesterday, the next group, the class of 2022, picked up its second pledge of the week.

West Chester, Ohio, offensive tackle Tegra Tshabola is the new man in the class, joining Louisiana cornerback Jyaire Brown in Ohio State’s class, as the second four-star, blue-chip prospect for the Buckeyes as they open up their next class just about as well as they opened up the current one. In Tshabola, Ohio State is adding the nation’s No. 69 overall player, and No. 6 OT per 247Sports.

Given his skillset, that number is only going to get better as he moves further along in his high school career. Currently a sophomore, Tshabola is already listed at 6-6, 320 pounds, well within the size range that Ohio State wants from its tackles. He looks like a grown man on his tape, and the things that need improved in his game are all minor, relatively easy adjustments or things that will come naturally with more physical development.

Let’s jump into the positives to start. Firstly, despite already having that college ready size, Tshabola still has room to grow in his frame. He has very good strength, but he’ll likely slim down slightly at Ohio State to help gain some mobility, which will give him some room to add more muscle into his core and legs, where the power of a tackle comes from.

It’s a similar situation to the one that 2020 signee Paris Johnson had coming out of school, where he was already excellent physically, but still has the room to grow more into his frame and add some mobility in the process by replacing sheer size with some extra lean muscle. Ohio State strength and conditioning coordinator Mickey Marotti is as good at that transformation as anybody, and will have a field day turning Tshabola into the kind of freak athlete that Ohio State always seems to have on the offensive line.

As for projecting his game to the next level, things are still a little tricky right now, for two reasons. Firstly, Lakota West, Tshabola’s high school, is primarily a run team. This isn’t uncommon with Ohio high school offensive linemen (Ohio State center Josh Myers came from a school that almost never passed), and it can be worked around, but it still adds a layer of mystery to linemen from those schools.

Secondly, quite a few of the teams on Tshabola’s tape are, frankly, very small. He has several impressive plays against bigger defensive linemen, but throwing a 5-6, 150-pound end, while funny, isn’t necessarily going to indicate a whole lot about what a 320-pound tackle can do.

With that said, as mentioned, there’s still a lot to like on Tshabola’s tape, and enough to make that lofty ranking feel earned, even without a ton of pass-blocking experience.

Here, against a pretty significant defensive tackle, Tshabola shows off a lot of what makes his game so intriguing. He fires off low and shows off explosive and violent hands in making contact. Because he starts low, he’s able to get underneath the tackle and extend his arms as he drives through him. This is pretty prototypical mauler stuff, and serves as an encouraging sign for what Tshabola can do in the run game. His footwork isn’t perfect, and he could afford to add a strong first step, but he shows off strength, a good understanding of leverage and, above all else, really violent and explosive hands.

The hands will translate really well to the passing game as well. Without any bad habits formed from high school in pass protection, Ohio State should be able to teach him a nice, fluid first step to deal with edge rushers, and the power that he has in that punch will cause some serious damage and help him neutralize faster ends before they’re able to start hand fighting or before they can make a move to slip past him. Tshabola is never going to be particularly fleet-footed because that’s just not how his body works, but he has the tools to be an outstanding pass protector even without great lateral movement.

That development will be the key in turning Tshabola into a starting-caliber, potentially elite tackle for Ohio State. He’s going to be good in the running game, maybe not as someone who gets down the field well, but as someone who can be trusted to keep him man in check and move him out of the way to create space. In pass protection, if Ohio State can add that strong first step without losing his heavy hands, Tshabola would make for a very strong right tackle, and a potential multi-year starter with the Buckeyes.