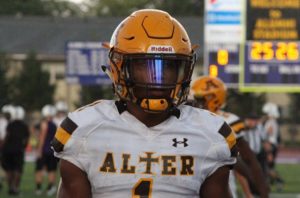 Ohio State co-defensive coordinator Greg Mattison brought a unique position with him to Columbus when head coach Ryan Day hired to help Jeff Hafley fix the Buckeye defense. Mattison called the position the “bullet” and modeled it after Michigan’s “viper” position, essentially a box safety/linebacker hybrid that can be used primarily as a zone defender to stop the pass, with the extra size needed to make plays in the running game as well. In 2019, Mattison used outside linebacker Pete Werner as a proto-bullet, and while he didn’t quite fit what was initially expected of the position from the outside, it does seem as though Werner is the example that Ohio State would like to follow at the position moving forward.

That’s to say, essentially, that the bullet is a linebacker with the ability to play some safety, rather than the inverse that Mattison utilized with players like Jabrill Peppers and Khaleke Hudson at Michigan. It worked well with Werner, who had a breakout year in 2019, and the way that Ohio State has recruited under Mattison indicates that Werner will continue to be the rule, not the exception. In the class of 2020, the Buckeyes landed California athlete Kourt Williams to fill the role next.

At 6-1, 216 pounds, Williams isn’t quite Werner’s size yet, but he has the tackling and instincts of a linebacker, with the athleticism to drop occasionally, though his best work will be done in the same role as Werner. In the class of 2021, Cincinnati’s Jaylen Johnson appears to be next in line, possession almost the exact same skillset as both Werner and Williams, with a frame that can take on more weight and the ability to make plays in both the running and passing game.

On Friday, Mattison looked further down the road, and secured his bullet for the class of 2022, landing a pledge from four-star Archbishop Alter (Ohio) High School athlete C.J. Hicks. Hicks is rated as the No. 162 player in the class and the No. 15 athlete, but he’ll likely see a bump when he’s assessed in his true position, as an uber-athletic linebacker.

At 6-4, 215 pounds, the frame is ideal for Hicks to make a move into that bullet spot in Columbus. He’s already shown the ability to bulk up, moving from sub-200 pounds up to 215 as a sophomore, and he has the frame to add even more weight, with a ceiling around 235 pounds. He may not hit that before he arrives in  college, but he’s going to step onto campus without needing a ton of weight added, and that means he should be able to find playing time early.

His ability to make plays will certainly help that effort to find early playing time as well. Hicks was second-team All-Ohio as a sophomore, playing primarily as a run stopping strong safety, though he flashed plenty of pass coverage ability as well, and played just about anywhere that his team needed him as the most talented player on the field.

Take this play as an example. He lines up as an outside cornerback dropping into a deep zone, but is still there to make a play near the line of scrimmage in the running game, because of his elite athletic ability. He doesn’t have blazing speed, but he has a great first step, even better lateral movement, and he drives through the ball carrier really well. Most importantly, he’s a smart and violent tackler, that doesn’t sacrifice form for highlights. That can be hard to find with younger defenders, and luckily for Ohio State, it isn’t a problem with Hicks, which means it won’t need be worked out of.

He shows off that lateral movement here too, and while his instincts are still developing, he has the physical ability to make a play like this even without grasping the minutiae of the position. Then, again, he’s great at the point of contact, exploding through the hit instead of slowing down, and wrapping up as he’s driving to avoid any break away. He knows that he’s stronger than the running back, but he doesn’t get lazy with the form, which is another huge plus in a young player.

Now, there’s still plenty of raw in his game, which is perfectly fine, and to be expected. He doesn’t have the technical side of the game down yet, specifically at linebacker, where he’s essentially using his athletic ability to overwhelm blockers rather than stacking and shedding, which he will need to add to be successful at the next level. He has plenty of work to do in play recognition as well, and his eyes are going to have to get better to really take advantage of that lateral movement.

Along with that, his coverage skills are lacking, primarily because he just doesn’t get a ton of reps. He’s physical at the line and has the ability to keep up with tight ends and running backs in man, but doesn’t have the zone chops or refined coverage ability that he will need yet.

That’s all, as mentioned, perfectly fine. He’s a rising junior at a school that cares about football and will provide solid coaching. He’s not going to come to Ohio State as the most refined player in the world, but he has all of the tools that he could possibly need, he’s already advanced as a tackler, and there’s no sorts of red flags or unfixable things in his game: he’s just young. With the kind of size and athleticism that he brings, showing up at the next level without any bad habits, and with a frame to add weight to, and with the tools that he has is more than enough to make his future coaches very happy.