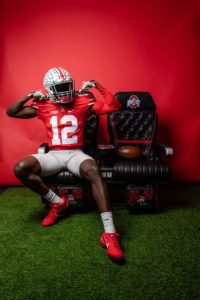 After taking just five defensive backs combined in the 2019 and 2020 classes, Ohio State is on the hunt for a massive group to fill the gaps left in the backfield in 2021, and the Buckeyes are off to pretty phenomenal start. They already had four 2021 commitments in the backfield entering yesterday, and added a fifth with the pledge of four-star Kentucky athlete Jantzen Dunn, snatching him away from Oklahoma at the last minute.

Dunn plays both ways for his high school team, but will suit up in the defensive backfield for the Buckeyes. That really isn’t up for question. What is up for question, however, is which backfield position he will ultimately fill.

He’s listed at 6-2, 178 pounds, which looks a lot like the tape measurements of a safety, but he runs a laser measured 4.54 40-time and has both the athleticism and fluidity to play on the edge as a long corner, in the mold of Ryan Watts, a 6-3 corner that the Buckeyes signed in the 2020 class. He’s played in both spots for his high school, and could play at an Ohio State caliber level at either spot, though he could really excel and turn into a star in the right spot.

Right now, based on his tape, it looks like the right spot would be safety. However, Ohio State has one safety committed right now in Andre Turrentine, and serious interest in a second with Derrick Davis. Jaylen Johnson is listed as a safety, but will move to linebacker at the next level, but even without him, Dunn would be entering Ohio State as part of a three-safety class.

That may not be ideal, but right now, it looks like what’s going to happen. Ohio State will likely think quite a bit about a six-man defensive back class, and that would mean space for three safeties and three corners. The Buckeyes have two corners in right now in Devonta Smith and Jakalin Johnson, with very good odds of finishing that group out with one of Jaylin Davies, Tony Grimes or Kamar Wilcoxson. If Ohio State misses on all three, a move to corner could be in the works for Dunn, but for right now, we’re going to scout him as a safety, rather than a cornerback.

He plays quite a bit more safety than he does corner, so he’s going to come to Ohio State with more experience and technical ability than you would usually see from a recruit listed as an athlete, though he does still have some technical stuff that will need to be cleaned up before taking the field. Starting with the positives, his athletic ability is quite apparent on film, and he plays just as fast as his 40 time indicates. He’s quick to react to the ball and is able to accelerate well to get where he needs to be.

He shows that off here, reading the quarterback’s eyes really well and reacting to the receiver drifting into an uncovered zone. He closes that space quickly and makes a play. This would translate well into Ohio State’s zone system, though with the way that the Buckeyes are recruiting, I would imagine that he’ll be doing this from a two-high safety system as the strong safety, rather than a single-high like Jeff Hafley ran. That probably suits him better anyway, so there isn’t a huge loss there.

He also shows off his tackling a bit on this play, and while it isn’t perfect, it’s good enough that he won’t need any major tweaks. He hits low, which, again, isn’t perfect, but it’s much better than hitting high, so it’s hard to complain too much. He isn’t a thumper, but he wraps up pretty well, and he’ll be able to get the job done as long as he isn’t asked to tackle any electric playmakers by himself in the open field, and if he’s forced into doing that, Ohio State has much bigger problems to worry about.

In coverage, he again isn’t perfect, but there’s a base to build on, and a base that provides a pretty high floor, if nothing else.

He’s a little stiff, which makes sense given his size and the fact that he’s a safety, not a cornerback, but it’s good to see him capable in off-man coverage on a slot receiver. He won’t have to do this a ton, but he has the athleticism to keep up when he is matched up with a wideout out of the safety spot, and that’s all that can really be expected of a safety. He isn’t going to lock anybody down in man, but he won’t get gashed.

Pair that ability to survive in man with pretty good ball skills that he flashes here, and it looks like Dunn is a plus defender in the passing game, which, paired with his ability to drive through the ball carrier and react quickly, makes for an all-around solid and trustworthy anchor at the back of the defense. He’s still a little rigid here, but as long as he isn’t being asked to play as a Malik Hooker style free safety, roaming the entire backfield, it won’t be a huge issue. He has the range and athleticism to take care of a deep third or deep half, and that’s all that Ohio State is going to need him to do.

With that, Ohio State can probably pencil Dunn in as a future multi-year starter. Nothing pops enough to make Dunn seem like a future first-round pick, but he’s good at just about everything, and he has the athleticism to cover what he’s going to struggle with as a young player. With a year or two in the program, he should be able to iron out some technical issues and grow into a very valuable piece in Ohio State’s defense as a smart safety that can contribute in deep coverage and step up to make six or seven tackles a game underneath, either by sniffing out a run or catching a receiver that thought he had found open space.