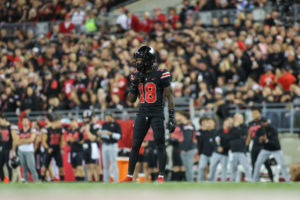 Ohio State head coach Ryan Day said Tuesday that he is hoping to have two of the Buckeyes’ top cornerbacks back this week against Rutgers.

Cornerbacks Cameron Brown and Denzel Burke, who started each of Ohio State’s first three games of the season, missed the Buckeyes’ 52-21 win over Wisconsin this past weekend, leading to the first career starts of sophomore JK Johnson and freshman Jyaire Brown.

Johnson and Jyaire Brown performed admirably for Ohio State, but Day said Tuesday they are hoping to see Cameron Brown and Burke on the field against the Scarlet Knights.

“We’re hoping to have at least Cam and Denzel back,” he said. “I don’t think we’ll see Jordan (Hancock) here for at least another week or so, but we’ll see. We’ll evaluate it and get a better feel for it later in the week.”

Cameron Brown and Burke’s return would be welcomed by Ohio State, but it would be hard to argue that their presence was missed against Wisconsin. The Buckeyes held the Badgers to just 104 passing yards on the night, bolstered by a strong performance from Ohio State’s safeties – particularly Tanner McCalister, who intercepted Wisconsin quarterback Graham Mertz on the Badgers’ first drive – and the debuts of Johnson and Jyaire Brown.

“I give a lot of credit to (cornerbacks coach) Tim Walton and Jim (Knowles) for getting those guys ready, and then for Jyaire and JK to step up the way they did,” Day said. “Very proud of them. It goes to show you – these guys both practiced all spring, all preseason – I don’t think they missed a practice between the two of them. When you’re going every day and you’re practicing, the only way to get better is to practice, and they did.

“When we went to put them in the game, the whole team believed in them because they saw them in practice,” he continued. “We knew it wasn’t going to be perfect, but they played very well and they’re both very talented. You could see it out there when they stepped into it.”

Walton complemented Johnson and Jyaire Brown’s performances on Tuesday, and said the work they did throughout fall camp helped them prepare for this moment.

“Those guys practiced a lot, and we go against the best in the business every day at practice, so that preparation and getting them game ready, you see that at practice a lot every day,” Walton said. “On top of that, it’s my job to make them calm and not bring any extra energy for them. We’re just playing football.”

Walton also shared Day’s optimism that Cameron Brown and Burke could return this week, but he noted that Ohio State won’t know until later in the week.

“We’ve just got to wait and see toward the end of the week to see how those guys are feeling, and hopefully we get them back,” he said. “It would be good to be at full strength with them. But we’re trying to get the other guys ready because we won’t probably know that until the end of the week.”