Ryan Day Previews Week One of the 2018 Season 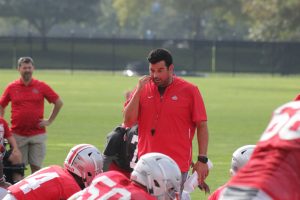 With Urban Meyer still serving his suspension, acting head coach Ryan Day met with the media on Monday as Ohio State enters game-week preparations for its week one matchup against Oregon State.

The Buckeyes are set to host the Beavers on Saturday at Ohio Stadium at noon. Oregon State finished the 2017 season 1-11, with its lone win coming against FCS opponent Portland State. The Beavers are coached by first-year head coach and alum Johnathan Smith.

What follows are the biggest takeaways from Day’s appearance in front of the media.