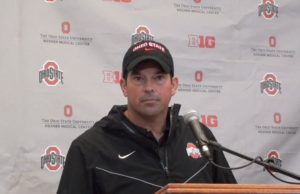 The last 48 hours for Ohio State have been intense for multiple reasons, but mainly because of what has developed at the quarterback position in that time.

Georgia signal caller Justin Fields is reportedly considering, or has already completed, his transfer out of Athens, Ga. and according to multiple reports, Ohio State is near the top of his list of possible landing spots.

Fields was the top dual-threat quarterback in the country according to 247sports in the 2018 recruiting class, and committed to Georgia out of high school. He completed 27 of 39 passes as a freshman for 328 yards and four touchdowns to zero interceptions as a freshman and also carried 42 times for 266 yards and four scores on the ground. He spent the majority of his time backing up starter Jake Fromm, who still has two years of eligibility remaining beyond the 2018-19 season.

Incoming Ohio State head coach Ryan Day, who has also served as the Buckeyes’ offensive coordinator and quarterbacks coach, would not comment on Fields’ situation Wednesday but did say he is keeping all options open for a quarterback, especially after 2019 commit Dwan Mathis flipped to Georgia.

“We’ll always look at all the options. Whatever we think can help our roster,” Day said. “The guys who are in our program, obviously they develop and work through our program, and so those guys obviously have priority. But if there is a need and there is someone that we need to plug in there, we’ll look at all those options.”

Currently, the Buckeyes have four scholarship quarterbacks on the roster, including Dwayne Haskins, who is widely expected to leave for the NFL after Ohio State’s Rose Bowl matchup against Washington on New Year’s Day. Day said Wednesday he wouldn’t know about Haskins’ future until after the Rose Bowl, adding that he always wants to have four scholarship quarterbacks on the roster. Should Haskins leave, Ohio State would be searching for a fourth with no signal caller currently committed in the 2019 cycle.

As for what Day is looking for when he recruits a quarterback, he said he wants the prospective student-athlete to have one particular skill that is elevated above the others.

“And J.T. (Barrett) had one and Dwayne had one, and I think one of our strengths on offense is the ability to adjust the offense to fit the quarterback and to fit our personnel,” he added. “And I think in college that’s really, really important because sometimes if you’re looking for a specific style, there may not be one in that class, so let’s go find somebody that has some sort of extraordinary talent and then build around it.”

Whether it is Fields or a graduate transfer, Day will need to find a fourth quarterback quickly, preferably before the final signing day in February. That of course, is assuming Haskins bolts for the professional ranks.