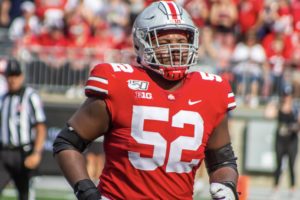 Ohio State head coach Ryan Day and athletic director Gene Smith spoke to the media over a Zoom call Wednesday following the Big Ten’s announcement that the football season will be reinstated and start on the weekend of Oct. 23-24.

During the call, both Day and Smith were asked about the possibility of offensive guard Wyatt Davis and cornerback Shaun Wade returning to the Buckeyes after both have previously declared that they would opt out of the incoming football season and enter the 2021 NFL Draft.

Smith, who answered prior to Day speaking on the call, said that he would direct that mostly to the Ohio State head coach, but also mentioned that he has had discussions with Davis about his future, and plans to do the same with Wade.

“Relative to Shaun and Wyatt, I had a lot of conversations with Wyatt over time, as did my wife, and so who knows what big fella’s thinking about out there on the west coast,” Smith said. “I texted him and told him ‘Don’t get burnt up, come home, there’s a lot of fires out there,’ so who knows what he’ll do. And then I had an opportunity to leave a message for Shaun this morning.”

Davis announced on Sept. 11 that he would not be returning to Ohio State, while Wade did the same three days later. Davis later said that his decision was not “truly official yet” to Buckeye Scoop’s Kirk Barton.

Day said that he’s also had communication with both players and their families, and he emphasized that both came back this season with a strong desire to play in 2020 after both Davis and Wade could have entered the 2020 NFL Draft.

“They wanted to play. At the time, the information that they had, we weren’t playing a season, and now it’s changed,” Day said. “If they want to play, I believe 1,000 percent they should be allowed the opportunity to play.

Wade spoke briefly on SportsCenter and said that he has not made any decision and that he just wanted to enjoy his birthday today. He also said that he has selected an agent but has not signed anything.

Since the Big Ten’s decision today, quarterback Justin Fields has already tried to make a pitch to Davis over Twitter.

Davis and Wade were both named as First-Team Preseason All-Americans, and were named by the team as two of the seven captains.