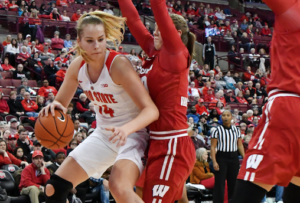 When the Ohio State women’s basketball team returned to the hardwood Sunday before 5,931 at Value City Arena in Columbus, three days removed from its 20-point rout of No. 23 Rutgers, head coach Kevin McGuff had to wake the Buckeyes up.

“We just didn’t have the right mental energy to start the game,” McGuff said of OSU, which started slow but shot 48.9 percent (23 of 47) from the field and 27.7 percent (5 of 18) on three-pointers. “I knew Wisconsin would be fired up — they came off a great win Thursday night against Michigan State — and we just didn’t match their intensity to start.”

“We had to step up,” said Juhasz, who referenced freshman forward Aaliyah Patty’s five points and five rebounds as the starter in Waterman’s place. “She’s a key player here, Kay Kay. … It’s a miss from the defensive end and offensive end, so that was my mindset — I have to step up today and lead the team around the paint.”

Ohio State (12-12, 8-7 Big Ten) opened the first quarter up 6-4 at the 5:16 mark, taking the lead on Patty’s layup and Juhasz’s jumper. Wisconsin answered with a three-pointer from Suzanne Gilreath (team-high 19 points) before Juhasz’s layup gave the Buckeyes an 8-7 edge at the 4:35 point, but the Badgers ended the final 3:20 of the frame on a 7-1 spurt capped by Jasmine Hale’s jumper with 29 seconds left and held a 14-9 advantage.

“The last five minutes, we started to play and it was just like, ‘Hey, we have to play,'” McGuff said. “Part of it, in reference to shooting, I thought we passed on some really good shots in the first half because we were tentative. It was like, ‘Hey, man. If you’ve you your hands and your feet ready and you’ve got a good shot, take it.’ We were turning the ball over late in the shot clock and after we had passed on good shots.”

Before the Badgers scored on Kendra Van Leeuwen’s layup with 22 seconds left in the frame and maintained the six-point lead into halftime, OSU cut the deficit to 34-30 after Grande’s triple at the 1:09 mark and Crooms’ breakaway layup 30 seconds later. Crooms contributed nine of the 15 points scored down the stretch, joining Juhasz as the game’s only players in double figures with 11 points apiece.

Ohio State’s momentum carried into the third quarter, tying the score at 36 points apiece on consecutive three-pointers from Grande and Crooms just 47 seconds in. Both team traded points on possessions throughout the subsequent four minutes into the 5:05 mark when UW went back up 43-40, but the Buckeyes bounced right back on graduate guard Adreana Miller’s triple 12 seconds later and brought the score back to 43-43.

Wisconsin went ahead 47-43 with 2:24 left in the frame after four Gilreath free throws, but OSU woke up with a 10-2 run and led 53-49. Junior guard Jensen Caretti started the surge on two free throws with 2:09 to go, followed by six straight points from Santoro — an and-one jumper at the 1:44 point and a three-pointer 36 seconds later — as Ohio State took a 51-47 lead.

While the Badgers ended the drought on Howard’s layup with 33 seconds left, the Buckeyes struck last when Grande knocked down two free throws. OSU outscored UW by 10 points, 23-13, in the period.

The third quarter’s finish set the stage for Ohio State to pull away in the final 10 minutes. Howard drew first blood for Wisconsin with a jumper in the paints at the 9:47 mark, but the Buckeyes answered on back-to-back layups from Grande and Santoro, creating separation and going up 57-51 with 8:24 left in regulation.

Those buckets from OSU’s graduate guards laid out the foundation for a 12-1 run as UW went down double digits, 65-52, with 4:14 to go in the fourth quarter. Wisconsin clawed back with a 16-5 advantage to close the last 3:29 — highlighted by consecutive three-pointers, from Beverly at the 16-second mark and Gilreath with five ticks left — but Santoro drained 2 of 4 free throws on Ohio State’s final two possessions and the Buckeyes escaped 70-68.

“We just keep playing, no matter what the score is and who’s on the court and who’s not,” Crooms said. “We just have energy with each other. We’re always telling each other, ‘Hey, you’ve got it.’ We’re just always sticking together and never giving up on each other.”

OSU looks for its third straight victory Thursday at Michigan State’s Breslin Center in East Lansing, Mich., for a 6 p.m. start on Big Ten Network. The last meeting Jan. 14 at Ohio State resulted in the Buckeyes’ 65-55 upset of the then-No. 17 Spartans.

“They’re one of the best teams in the league,” McGuff said of MSU (17-7, 7-6). “We played one of our best games the first time we won here, so I know they’ll be focused again, but they’ve got a great team. They’ve got a bunch of really talented upperclassmen and that’ll be a significant challenge for us.”