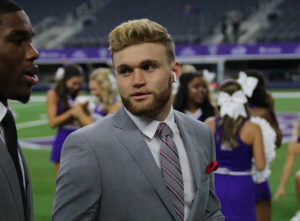 Entering the portal means that Martell, who was a redshirt freshman in 2018 while serving as the primary backup to Dwayne Haskins, can be contacted by other schools regarding a potential transfer. It does not guarantee that he will leave Ohio State, though.

The new was first reported by Jeremy Birmingham of Lettermen Row and Kyle Rowland of The Toledo Blade.

Martell joined Ohio State as a four-star prospect in the 2017 recruiting class out of Las Vegas Bishop Gorman. At the time he was rated as the No. 56 overall player and No. 2 dual-threat quarterback, according to the 247Sports composite. He played in six games this season, going 23 of 28 (82.1 percent) for 269 yards with one passing touchdown. He also finished third on the team with 128 rushing yards to go with two touchdowns on 22 attempts.

With Haskins leaving for the NFL, the expectation had previously been that Martell would win the starting job in 2019. That changed, however, when Georgia’s Justin Fields transferred to Ohio State ahead of the spring semester. Fields was a five-star prospect out of Kennesaw (Ga.) Harrison in 2018 and served as the Bulldogs’ No. 2 this season. In the 2018 recruiting class, he was the No. 2 overall player and No. 1 dual-threat quarterback. Fields must be granted a hardship waiver in order to be eligible to play in 2019, but he is widely expected to receive that waiver before the start of the season.

While Martell could still opt to stay at Ohio State, a transfer would leave the Buckeyes with three scholarship quarterbacks for 2019 – Fields, rising redshirt freshman Matthew Baldwin and former West Virginia transfer Chris Chugunov. The team likes to keep four scholarship quarterbacks on the roster, so if one departs, the Buckeyes could be on the market for another transfer this spring.