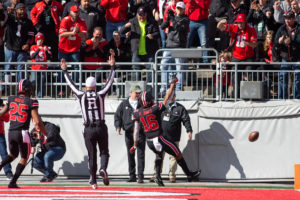 Ohio State linebacker Keandre Jones, who will be a senior in 2019, has entered his name in the NCAA transfer portal, according to a report from Lettermen Row.

The move means other schools can now contact Jones regarding a potential transfer, although it does not guarantee he will leave the Ohio State program. The Buckeyes also have the right to pull Jones’ scholarship because of the decision, but there is no indication that is an expected move.

According to the report from Lettermen Row, Jones hasn’t made a final decision, but would like to explore his options as a path to playing time in Columbus is unclear.

Jones (6-2, 228), from Only (Md.) Good Counsel, was once committed to Maryland before flipping to Ohio State as a four-star prospect in the class of 2016. He was rated as the No. 98 overall player and No. 9 outside linebacker in the class.

He played in six games as a true freshman in 2016, recording four tackles along the way. Jones became a key special teams contributor in 2017, making 15 tackles in 14 games before coming up with 10 stops in 12 games this season in addition to a punt block for a safety against Nebraska.

Throughout the 2018 season, Jones was listed as a backup to fellow junior Malik Harrison, who is expected to keep his role in 2019. Ohio State’s other starters at linebacker – Tuf Borland/Baron Browning in the middle and Pete Werner on the outside – will all be juniors in 2019.