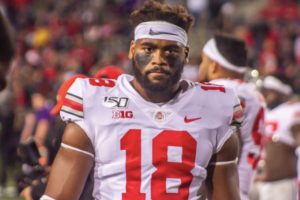 The Gahanna, Ohio native has struggled with injuries through much of the season, missing all but three games because of nagging leg issues. Cooper made his season debut in the fifth game of the year against Nebraska, recording one tackle.

He missed the next week against Michigan State, before returning after an off week against Northwestern when he again had one tackle. His final game came against Rutgers on Nov. 16, where he added one more tackle added to his total.

With just three tackles on the year, and only three games under his belt, Cooper will preserve his eligibility, and look to return as a fifth-year senior in 2020. Because of updated redshirt rules, Cooper would be eligible to play in a fourth game, though Ohio State has not reported any news of a return.

The news likely means that Cooper will not play in Ohio State’s game with Penn State kicking off at noon, despite being listed as healthy on a status report released on Nov. 22.

Ohio State has filled the void left by its senior end with a rotation of young players through its first 10 games. Freshman Zach Harrison, redshirt freshman Javontae Jean-Baptiste, sophomore Tyler Friday and fifth-year senior Jashon Cornell have all filled in at defensive end as Cooper has fought through his injuries.

Cooper has 49 total tackles during his four years at Ohio State, including 5 1/2 sacks and 10 1/2 tackles for a loss. He started 12 games for the Buckeyes as a junior in 2018, recording 25 tackles, 2 1/2 sacks and 6 1/2 tackles for a loss. He was expected to start opposite junior Chase Young entering the season. Cooper was named a team co-captain back in August, and was optimistic his best was yet to come.

“My career so far has been well, but I know I can bring a lot more to the table,” Cooper said at Big Ten Media Days in July. “I know I can be a much better player than I’ve shown and I’ve taken the necessary steps to do that. I’ve worked extremely hard to improve my game and I’m pretty sure this season I will show not only myself, but my teammates and my Rushmen the player I’m supposed to be.”

His coaches have praised him at every turn this season, for both his leadership and ability to stay positive through adversity.

“Jonathon Cooper, all he does is everything the right way,” head coach Ryan Day said after Cooper was named a captain. “Really proud of him. He was just raised the right way. Comes to work every day. Has a smile on his face. He’s tough. He will be a great captain as well.”