Report: J.T. Barrett To Work Out For The Dallas Cowboys 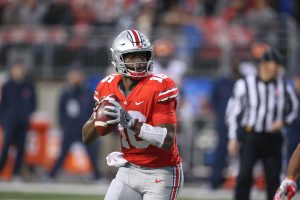 According to ESPN, the Dallas Cowboys are bringing in former Ohio State quarterback J.T. Barrett on a tryout basis this weekend during their rookie minicamp. He will be joined by Illinois State signal caller Brady Davis.

Barrett has been a member of the New Orleans Saints, Seattle Seahawks and Pittsburgh Steelers since 2018, but has yet to throw a pass in an NFL game, and he has not had an NFL home since the Steelers released him from their practice squad in August of 2020.

He threw for 9,434 yards with 104 touchdowns and 30 interceptions at Ohio State. He was named the Big Ten’s Griese-Brees Quarterback of the Year award-winner three times, and Barrett still holds the league’s record for passing touchdowns.