REPORT: Former OSU DL Hankins To Work Out For Browns 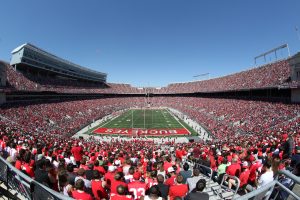 Former Ohio State defensive lineman Johnathan Hankins is expected to work out for the Cleveland Browns this week, according to a report from Cleveland.com.

The Browns could use some depth at defensive tackle, as they traded 2017 starter Danny Shelton to the New England Patriots this past spring. One of Cleveland’s current starting DTs, Trevon Coley, is presently out with a high ankle sprain and backup Caleb Brantley also is dealing with an ankle injury.

Hankins was released by the Indianapolis Colts in March after signing a three-year, $30 million contract with them last offseason. He had 44 tackles and two sacks while starting all 15 games that he appeared in during his lone season with the Colts in 2017.

Hankins inked a deal with Indianapolis after logging 43 tackles, three sacks and 10 quarterback hits in 2016 for the New York Giants, who selected him the second round of the 2013 NFL draft. Through five seasons as a pro, Hankins has appeared in 67 games, recording 184 tackles, 12 sacks and three forced fumbles.

A native of Detroit, Hankins suited up for Ohio State from 2010-12, leaving his senior season of eligibility on the table. He played in all 38 games as a Buckeye, finishing with 138 career tackles, 16½ tackles for loss and five sacks.