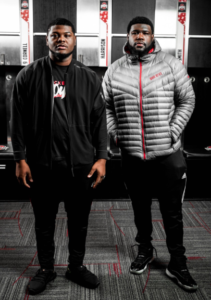 As the 2019 recruiting class winds down, Ohio State aims to fill the few spots left after the Buckeyes inked 15 letters of intent during the Dec. 19-21 early signing period.

There's nothing quite like a visit to The Ohio State University 😍#GoBucks pic.twitter.com/QqvHDkJ6Og

Unsigned after the early period but committed to the Buckeyes dating back to August 2017, Huntington (W.Va.) Spring Valley four-star offensive guard Doug Nester was back on campus for the second time since Dec. 7-9 when he took his official visit. The 6-6 1/2, 305-pounder called off an official visit to Georgia in January but remains slated for weekend trips to Penn State (Jan. 26) and Virginia Tech (Feb. 2) before he makes his final decision Feb. 6 on National Signing Day. Nester is the 247Sports composite’s No. 96 overall prospect, No. 6 offensive guard and No. 2 player in West Virginia.

One of OSU’s top targets along the offensive line used his official visit, coming back to Columbus for the first time since he took an unofficial visit that led to an offer Nov. 21 and watched practice at the Woody Hayes Athletic, when Indianapolis Ben Davis three-star offensive tackle Dawand Jones made the drive Saturday down Interstate 70. The 6-8, 360-pounder included Ohio State in his top five after he returned home from the trip. He is the 247Sports composite’s No. 1,026 overall prospect, No. 86 offensive tackle and No. 13 player in Indiana.

The Buckeyes added their seventh member to the 2020 recruiting class Monday when they received an on-the-spot commitment from Cincinnati Elder offensive tackle Jakob James. The 6-5, 275-pound James became a priority prospect throughout the fall and culminated his recruitment after he picked up an OSU offer Monday at the end of the unofficial visit.

Also in 2020 on the offensive line over the weekend, Ohio State’s top target made his way back from up north when Justin Rogers appeared Saturday in Columbus. The five-star offensive guard from Oak Park, Mich., was shown with Detroit Cass Tech product and Buckeyes senior offensive tackle Joshua Alabi.

Rogers’ recruitment likely has ways to go before he makes his decision, but the surprise unofficial visit is the first for him since OSU’s 2018 season ended. Rogers is the 247Sports composite’s No. 14 overall prospect, No. 1 offensive guard and No. 1 player in Michigan for 2020.