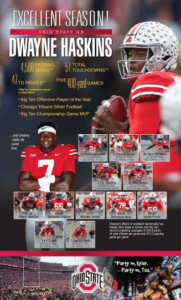 From his direct comments before the Big Ten Championship Game to the pose he struck after 1 of 5 touchdown passes last Saturday in Ohio State’s 45-24 win over Northwestern, Dwayne Haskins has made his thoughts clear on where he fits into the Heisman Trophy discussion.

Two days after Haskins carved the No. 22 Wildcats (8-5) behind his 499 yards on 34-of-41 (82.9-percent) passing to an interception, winning Big Ten Championship Game MVP and leading the Buckeyes (12-1) to their second straight conference title, the sophomore quarterback turned dreams into reality Monday when he was named 1 of 3 finalists for the Heisman, awarded to the most outstanding player in college football.

Haskins, who leads the nation in passing yards (4,580) and touchdowns (47), joins a pair of quarterbacks in Alabama sophomore Tua Tagovailoa and Oklahoma junior Kyler Murray in New York for the weekend when the Heisman announces the winner of the award in its 84th year. The finalists are slated to arrive Friday and get shown around the city with various activities and press availabilities on tap, followed by the revelation in the trophy ceremony Saturday at 8 p.m. ET on ESPN.

Talking to local media Sunday in the Woody Hayes Athletic Center team room after No. 6 OSU learned of its postseason fate, which resulted in its second straight season without the College Football Playoff and instead set up an appearance in the Rose Bowl against No. 10 Washington (10-3) on Jan. 1 at 5 p.m. ET, Haskins responded honestly when he was asked about the gravity of his status as a potential finalist with Tagovailoa and Murray.

“It would mean the world,” said Haskins, who becomes the program’s first Heisman finalist since quarterback Troy Smith won the award in 2006. “Quarterbacks, we all are the alpha males, and we all compete against each other at all the camps, and we all know about one another. To be able to — Kyler coming out of high school was the best quarterback in the country. Tua was like a God. And to be able to be in the same conversation with them makes me feel like I put the work in to be considered the best quarterback in the country. I have much respect for those guys.”

Congrats to these 3 young men! pic.twitter.com/5CxV04Jm48

While they entered their respective schools as blue-chip prospects in subsequent recruiting classes — Murray a five-star in 2015, Haskins a four-star in 2016 and Tagovailoa a five-star in 2017 — the three already belong to high school football’s national fraternity. Murray in 2014, Haskins in 2015 and Tagovailoa in 2016 made the Elite 11 each summer before graduating and going to the next level. While Murray and Haskins made the final cut in their years, Tagovailoa won the event in his group.

“I’ve always wanted to be in this situation, worked really hard to get here,” Haskins said. “It’s been everything to be able to go out there and compete and do the things that I’ve done this year. But I didn’t really shock myself and feel like I couldn’t achieve it. I just had to go out there and do it.”

The 6-3, 220-pound Haskins has been a constant in Ohio State’s spiked success on offense. The Buckeyes rank second in total yards (548.8) behind Oklahoma (577.9) and passing yards (373.0) behind Washington State (379.8). While credit is due to offensive coordinators Ryan Day and Kevin Wilson, Haskins made OSU go.

“That’s one of the best performances in the last two weeks in college football history,” head coach Urban Meyer said Sunday of Haskins, whose arm catapulted Ohio State past its final two games of the regular season — a 52-51 overtime edge of Maryland on Nov. 17 and a 62-39 rout of then-No. 4 Michigan on Nov. 24. “I’ve been lucky. … (Former Ohio State quarterback) J.T. (Barrett), I thought should have went. (Former Buckeyes quarterback-turned-receiver) Braxton Miller one year, I thought should have went. That’s such an incredible experience for those players to bring them.

“But he’s going one way or the other. I’ll fly him there myself. The way he plays and his stats against those other quarterbacks, he’s got to go to New York. I don’t know if he’ll win it. I don’t know who’s making those decisions.”

While the presentation might not ultimately end up with a walk across the stage from Haskins (73 rushes for 122 yards and four touchdowns) — Tagovailoa (48 rushes for 190 yards and five touchdowns) and Murray (123 rushes for 892 yards and 11 touchdowns) have long been at the top of the discussion — the Potomac (Md.) Bullis School product has done enough in the eyes of OSU to be honored.

Beyond the public support from Meyer, who was cautious earlier in the fall to put Haskins on the Heisman pedestal, Ohio State has gotten behind Haskins entirely. After he put an exclamation mark on his regular season with Northwestern as the latest victim, the team’s sports information director released a graphic rallying for Haskins, titled “Dwayne’s World” with recognition of surrounding members of the Buckeyes’ offense.

“Everyone sees how well we do on offense, and the last thing he wanted to do was for me to get big headed, and he didn’t want me to stop getting better,” Haskins said of Meyer’s influence and staying grounded as OSU’s starting quarterback. “It was my first year starting, only a few games starting playing, and the last thing he wanted me to do was for me to stop thinking of my teammates, stop thinking of the coaches, and think it was all about me. So he did a great job with that.”