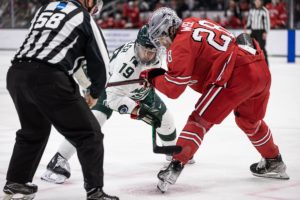 Coming off an open weekend, No. 10 Ohio State hoped to start a winning streak with the possibility of being at the top of the Big Ten standings.

Ohio State coach Steve Rohlik prior to the series  thought his team was mentally refreshed because of a few days off without games but was leery of regaining the focus necessary to compete against the Spartans.

“It’s just a mindset,” he said. “And I think that’s really the biggest thing. Sometimes you get that week off and you’d want to keep going but for us, we played a lot of games there in October, 10. So, I think it was a good break for us with some injuries and stuff, but it’s a mindset to get yourself back to where you need to be.”

Unfortunately, they skated into a team that resembles the 2021-22 Buckeyes – one that was lightly regarded in the preseason but lead the Big Ten until the final three weeks of the regular season.

In the first game at Munn Ice Arena in East Lansing, Mich., the score was tied 2-2 in the third period when Daniel Russell scored the go-ahead goal for the Spartans (8-3-1, 4-1-1). They added an empty-netter with 56 seconds left to the delight of 4,609 supporters.

Freshman defenseman Tyler Duke scored his first goal to give the Buckeyes a 1-0 lead at 14:39 of the first period with a shot from the point. Scooter Brickey and Tate Singleton assisted.

Jake Wise made it 2-2 at 14:12 of the second on a power-play goal, who scored off a pass from Mason Lohrei after exiting the penalty box but the Buckeyes were hampered by giving the Spartans five power plays from late in the first through the middle period. Daniel Russell scored the winner at 16:24 of third period and Justin Jallen added an empty-netter with 56 seconds left.

“I thought we played a good first period,” Rohlik said. “Obviously, the penalties toward the end of the first and in the second derailed our momentum. It was a pretty even game the rest of the way.”

In the rematch before a crowd of 6,387, the Spartans scored a minute into the game. Joe Dunlap tied it seven minutes later but Michigan State took a 3-1 lead after 20 minutes.

Travis Treloar made it 3-2 with a power-play goal at 1:27 of the second before MSU carried a 4-2 advantage into the third. Davis Burnside cut the deficit to 4-3 at 6:29 but the Buckeyes were unable to get the equalizer.

“This was a tough weekend,” Rohlik said. “The first two periods tonight weren’t great and we put ourselves in a hole. The positive was how hard we battled in the third. That’s the way we need to play for 60 minutes.”

The Buckeyes host Notre Dame at 7 p.m. Friday and 5 p.m. on Saturday.