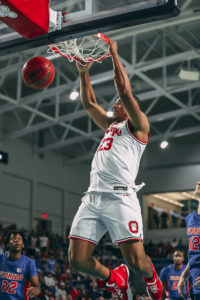 From technical issues on Fox’s end that removed the traditional scorebug and cast Ohio State and Florida into the days of early sports broadcasting without a constantly updated score tracker and clock to frenetic press defense and ticky-tacky fouls, the matchup between the Buckeyes and Gators on Thanksgiving eve (Nov. 24) felt very much like an early-season warm-up.

The two traded blows through a back-and-forth first half, with Ohio State landing the first major strike on a Justin Ahrens three-pointer, thanks to a Jamari Wheeler pass that broke Florida’s full-court press to give the Buckeyes an early 11-4 lead.

That was all the senior winger was able to contribute on the board in the first half though, with much of the scoring workload falling again to E.J. Liddell, fresh off his 28-point showing against Seton Hall.

Liddell had 13 first-half points on 5-of-7 shooting while holding Florida big man Colin Castleton to only five points, but his teammates didn’t offer much in the way of offensive assistance, limiting Ohio State’s edge to four points, 30-26, at the break.

Out of the half, he got some help. Kyle Young opened the scoring for the Buckeyes with a pair of baskets, Wheeler added in a pair of his own, Ahrens hit his second triple of the game and Zed Key picked up his first points of the game with an impressive sequence that saw him hit a jumper, block an Anthony Duruji dunk and then slam one home himself to extend Ohio State’s lead to 10 points at 47-37.

It was not built to last, evidentially. Florida answered with a run of its own and had the deficit down to just two points at 51-49 which, in tandem with Young’s fifth foul, had the game flowing distinctly in UF’s direction.

The two would trade runs for the rest of the evening. Ohio State answered Florida’s surge with two Liddell free throws, another from Sotos and a Wheeler three-pointer, Florida responded to that with several buckets of its own. A Liddell deep-ball and a Branham transition layup put the Buckeyes up by seven, Florida hit a triple of its own, two free throws and a twisting layup to knot the game at 63.

With just over two minutes to play, Castleton broke the tie and gave Florida its first lead of the second half with a free throw, 66-65. Liddell put the Buckeyes back on top with a pair of his own free throws, and after a Phlandrous Fleming Jr. miss at the other end, Wheeler corralled a critical offensive rebound to keep the Buckeyes in control off the ball following a miss from Ahrens.

That second life offensively provided one more point on a Key free throw, but Florida answered with a bucket of its own to tie the game again. Facing a slight break between the shot and game clocks, the Buckeyes traveled down the court and found a good shot for Liddell, but it careened harmlessly off the rim.

With seconds to play, Florida’s Tyree Appleby rushed down to the court and gave Ohio State some payback for its first-round buzzer-beater, draining one of his own for a 71-68 win.