Rally Comes Up Short As No. 21 Wisconsin Downs Buckeyes 73-67 In OT 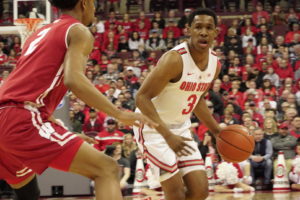 Ohio State may have still have won in losing if the NCAA selection committee was watching what unfolded at Value City Arena on Sunday.

Without Kaleb Wesson for a third straight game, the Buckeyes were on the verge of being blown out by No. 21 Wisconsin to run their losing streak to three and further hamper their chances to make the NCAA Tournament.

But the Buckeyes staged a miraculous rally from being down 23 early in the second half and 15 with under four minutes left thanks to a 16-1 in the final 3:36 run to send the game to overtime tied at 63.

Amazingly, OSU scored only 16 points the entire first half when it trailed 26-16.

However, the Badgers were able to hold off the Buckeyes in OT for a 73-67 win.

With the loss, Ohio State (18-13, 8-12 Big Ten) finished eighth to earn a first-round bye and will play Indiana at 12:30 p.m. Thursday in the conference tournament at the United Center in Chicago.

Wesson, the 6-9 sophomore center, was suspended March 1 by the school for violating athletic department policies.

Without him, OSU lost 86-51 at then-No. 14 Purdue and was upset 68-50 at Northwestern as the Wildcats ended a 10-game losing streak on Wednesday.

Wesson’s return is unknown, but the spunk displayed in the loss to Wisconsin in his absence certainly can’t hurt how others view the team.

Senior C.J. Jackson led the Buckeyes with 22 points and freshman Justin Ahrens made three three-pointers during the late run.

On Senior Day it was appropriate that the three – Jackson, Woods and Joey Lane started.

Jackson played junior college ball at Eastern Florida State before spending three seasons as a Buckeye. Woods is a graduate transfer who is completing his only season at Ohio State. He played for Charlotte as a freshman and the past two seasons at Wake Forest. The fan favorite Lane is a former walk-on who made his first career start and played  in his 35th game for the Buckeyes.

It wasn’t quite as bad vs. the Badgers but still not good. They went 0 for 11 until a jumper by freshman Duane Washington Jr. with 14:01 to play left OSU trailing 4-2.

OSU junior forward Andre Wesson, Kaleb’s older brother, picked up his third foul on a charging call with 2:48 remaining in the first half. He left the game but started the second half and committed his fourth foul just 12 seconds in to enable Happ to complete an old fashioned three-point play. Wesson fouled out with 5:36 left.

Happ then committed an offensive foul, but Jackson missed a three-pointer with 1.3 seconds left. Woods intercepted the Wisconsin inbound pass and barely missed a shot from half court at the buzzer.

Iverson scored Wisconsin’s first four points of OT to counter a pair of free throws by Jackson to make it 67-65 and with the Badgers ahead 69-67, Davison iced the game on two free throws with 25 seconds left.

Woods missed a three-pointer, committed a foul and D’Mitrik Trice made two more from the line with 12 seconds left for the final score.

With the win, Wisconsin (22-9, 14-6) secured the No. 4 seed for the Big Ten tournament in Chicago and a bye through the first two rounds.