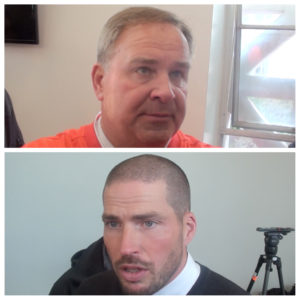 An up-and-down regular season for Ohio State culminated with its latest twist last Saturday when the Buckeyes bounced Michigan out of Ohio Stadium in a 62-39 rout for the Big Ten East Division title. On both sides of the ball, the No. 6 Buckeyes (11-1, 8-1) made necessary adjustments and tightened units to wax the No. 7 Wolverines (10-2, 8-1) and enter the Big Ten Championship Game against Northwestern with some steam.

Ahead of Saturday’s clash at Lucas Oil Stadium in Indianapolis, an 8 p.m. kickoff on FOX, will OSU be able to keep its momentum brewing vs. the No. 21 Wildcats (8-4, 8-1)? After head coach Urban Meyer spoke Thursday on his radio show with 97.1 The Fan, he gave way to offensive coordinator/tight ends coach Kevin Wilson and co-defensive coordinator/safeties coach Alex Grinch, who broke down the improvements in The Game and how those adjustments factor into the conference title clash.