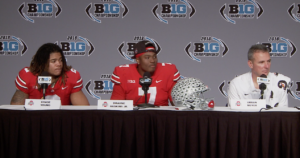 Ohio State head coach Urban Meyer on winning back-to-back Big Ten titles: “This means representing the Big Ten Conference, arguably the best conference in college football, representing the East Division, arguably the best division in college football, and I’m surrounded by some of the best football players I’ve ever been around. And they are even better people. And one last thing: Buckeye Nation, we love you, thank you for your support all year long.”

Meyer on what his pitch to the College Football Playoff selection committee would be: “I think all you have to do is look at the body of work. We won on the road and got some tough wins: TCU, Penn State, Michigan State, and then to come back and play against our rivals the way we did and then we went and represented the Eastern (Division). We had a great game here, I think we deserve a shot.”

Meyer on Ohio State’s senior class: “Being respectful to all the other senior classes we’ve had, it’s hard to say they aren’t the best I’ve ever been around. These kids, think about what they have been through, think about how they stuck together through hard times and they found a way to finish this thing off the right way and win a championship. I love them.”

OSU sophomore quarterback Dwayne Haskins on his performance: “We had great protection all game. Receivers bringing a lot of clutch plays on third down and first down. We had great play calling. And the biggest thing was execution. And the thing I had to do was give the ball to playmakers and let them make the plays. I’m just the distributor.”

Haskins on his two touchdown passes to OSU fifth-year senior wide receiver Terry McLaurin: “A lot of quarterback-receiver relationship is trust, and relying on a receiver to make a play when you need them to. Terry was there for me, made a clutch play on third and 11, bought some time, let him get open. And really credit to how much we worked in practice on scramble drill and just getting open for everybody.”

OSU sophomore defensive end Chase Young on the turnaround since the Buckeyes lost at Purdue on Oct. 20: “I think after we lost to Purdue, we sat down with (defensive coordinator Greg) Schiano. We had a real tough meeting. And we just got together and just had to trust each other. And that was what the meeting was about. And I think every game since then, Coach Schiano trusted us. We trusted him. We trusted our offense. Trusted Coach Meyer. I think everybody just trusted in – we call it the brotherhood – and I think the brotherhood was real strong today.”

Northwestern head coach Pat Fitzgerald on his review of the game: “Looking at the game I tip my hat off to Coach Meyer, his staff, and his players. They are Big Ten champions for a reason. They earned it here tonight and made a whole bunch of explosive plays and we knew we had to limit that. I thought we had a pretty good job at that for the most part, but a couple plays got away from us. When they execute the way they did we have to be flawless and obviously we weren’t.”

Northwestern senior quarterback Clayton Thorson on what he will remember from the game: “I think it will be that third quarter when we scored a few and got right back in it and just fighting with my brothers. I mean we were down at the end there by 21 and we came back and kept going. There’s a special bond between guys who keep fighting and that’s what we have done all year and that’s what we have done since I have been here. I will remember playing with those guys.”

Northwestern senior defensive lineman Joe Gaziano on Fitzgerald’s message after the game: “He mainly thanked our seniors. They brought the standard of coming to Indianapolis. It was a powerful message and wherever we end up in a bowl game we know that we are going to attack that. The message was clear that we aren’t done yet and we have another game to play, to become bowl champions for the third season in a row.”