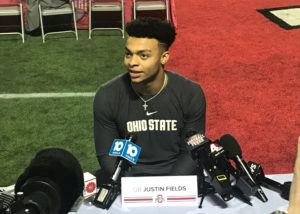 Throughout the Urban Meyer era at Ohio State, the quarterback run was a key part of the offense. That is until last season, at least.

In 2018 the Buckeyes turned to Dwayne Haskins, who broke nearly every major single-season passing record at the school but rarely made an impact with his legs. Haskins finished his lone season as the starter with 373 completions on 533 attempts for 4,831 yards and 50 touchdowns to just eight interceptions. That said, the quarterback ran 79 times for just 108 yards (1.4-yard average) and four scores.

With Meyer – and Haskins – both gone, the Ryan Day era at Ohio State is set to start with a running threat behind center, at least if everything goes to plan. The Buckeyes brought Justin Fields in as a transfer from Georgia with the idea that he’d be the starter. He’s now eligible, and it’ll be up to him to win that job this spring or in fall camp.

Fields, for his part, was a five-star dual-threat quarterback coming out of high school, and he noted that he’s more of a runner than Haskins.

“I see myself using my legs a little bit more than Dwayne did last year,” Fields said. “But I’m really just here to do what Coach Day asks me to do and whatever is best for the team.”

Fields might have been downplaying his own running ability with that comment. As Jake Fromm’s backup at Georgia last season, the Kennesaw, Ga., native ran 42 times for 266 yards (6.3-yard average) with four touchdowns and a long of 47 yards.

Of course, Fields is deadly as a passer as well. In limited action off the bench last season he completed 27 of 39 passes for 328 yards and four scores without throwing a pick.

“I would describe myself as kind of a playmaker,” he said. “A player that’s able to extend plays when a play breaks down and an exciting player.”