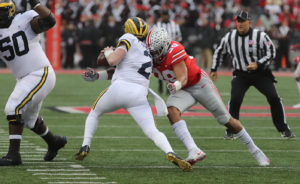 A week ago, Ohio State was ranked 10th in the nation and on the outside looking in for the College Football Playoff. Way outside.

Now, the Buckeyes have added an impressive 62-39 win over then-No. 4 Michigan, launching them firmly back into the discussion heading into the Big Ten championship game.

On Tuesday at 7 p.m., the penultimate College Football Playoff top 25 will be revealed on ESPN. Where Ohio State lands this week could go a long way toward determining its fate no matter what happens on Saturday.

When this week’s rankings are announcing, one thing is for sure – the Buckeyes will be making a big climb up the standings.

In both the Associated Press top 25 and the coaches poll, Ohio State ranked No. 6 this week, behind No. 1 Alabama, No. 2 Clemson, No. 3 Notre Dame, No. 4 Georgia and No. 5 Oklahoma. As things stand, the top six in the CFP standings is likely to look identical.

Here are the potential twists:

If the first scenario happens, then Ohio State can reasonably assume that it will be in the final four with a win over Northwestern this weekend, assuming that Alabama beats Georgia. If the second scenario comes true, then the Buckeyes can start start preparing for a trip to Pasadena if they win the Big Ten.

The thing that could completely blow up the rankings would be a Georgia win over Alabama, likely leaving both SEC teams in the final four and both Oklahoma and Ohio State on the outside looking in.

On Saturday, Oklahoma faces Texas – the only team to beat the Sooners this year – in the Big 12 championship game at Noon, so the Buckeyes will know that result before they kick off against the Wildcats.

The Big Ten title game is scheduled for 8 p.m. at Lucas Oil Stadium in Indianapolis. It will be broadcast on FOX.