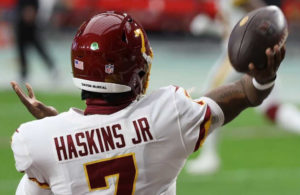 Former Ohio State quarterback Dwayne Haskins reportedly reached an agreement with the Pittsburgh Steelers on a one-year contract on Thursday afternoon, less than one month after he was released by the Washington Football Team.

The signing was first reported by NFL Networks Ian Rapoport, while terms were announced by ESPN’s Adam Schefter.

Haskins, the No. 15 overall pick in the 2019 NFL Draft, was benched in the fourth quarter of Washington’s loss to the Carolina Panthers on Dec. 27 after he threw two interceptions and lost a fumble. He was also fined $40,000 and stripped of his captaincy just a few days prior for violating the NFL’s COVID-19 protocols when he was photographed without a mask while attending a private party.

Haskins threw for 2,804 yards and 12 touchdowns compared to 14 interceptions in 16 career games with Washington. He recently conducted a visit with the Carolina Panthers, but his trip to Pittsburgh on Thursday ultimately led to him signing with the Steelers.

Update: Haskins and the Steelers confirmed the signing later in the hour.