Parris Campbell Selected By Indianapolis Colts With No. 59 Overall Pick In 2019 NFL Draft 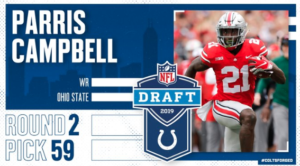 Parris Campbell became Ohio State’s third player selected in the 2019 NFL draft from Nashville, Tenn., on Friday when the Indianapolis drafted the former Buckeyes H-back (2014-18) with the 59th overall pick in the second round.

Campbell came to Columbus with high expectations as a consensus four-star recruit, who was rated as a top-25 player nationally, regardless of position.

The Akron, Ohio, native led St. Vincent-St. Mary to back-to-back state championships at running back, rushing for 2,937 yards and scoring 50 touchdowns in his final two seasons.

After converting to H-back at Ohio State, Campbell initially struggled with pass catching and the intricacies of route running, but he became an effective receiver through hard work.

Campbell found himself behind Curtis Samuel on the Buckeyes’ depth chart, but continued to hone his receiving skills in practice and limited game action.

Emerging as a receiver in 2017, Campbell hauled in 40 receptions for 584 yards and three touchdowns. His production earned him Third-team All-Big Ten honors (coaches) as a redshirt junior receiver.

Campbell’s past struggles became easy to forget during his senior campaign when he became just the fifth player in Ohio State history to tally at least 1,000 receiving yards in a season, joining David Boston, Terry Glenn, Cris Carter and Michael Jenkins. .

He continued to impress scouts at the NFL scouting combine, where he displayed his world-class athleticism. Campbell ran the third-fastest 40-yard dash among all players at 4.31 seconds and the fastest 20-yard shuttle among receivers at 4.03.

Beyond his elite speed, Campbell showcased his leaping ability, ranking third among wide receivers in the broad jump at 135 inches (11-3) and fifth in the vertical leap with a 40-inch bound.