Pantoni: All Hands On Deck For June Visit Boon 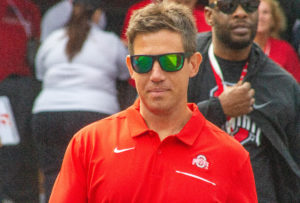 It’s been almost 15 months since prospective Ohio State recruits were last allowed to take their recruiting visits to Columbus – or any school, for that matter. The NCAA announced on March 13, 2020, that it would be instituting an indefinite dead period as a response to the coronavirus pandemic, meaning that all visits, be it official, unofficial, in-home, or scouting, wouldn’t be allowed until the end of that dead period.

On June 1, 2021 that dead period that left the class of 2021 essentially without visits will come to a close, and schools across the nation will again open their doors to recruits. The vast majority of players that will be taking trips to see potential landing spots will be in the class of 2022, but classes down the road are permitted to take unofficial visits. Ohio State will be one of five programs that plays host to 2021 five-star Sammamish (Wa.) Eastside Catholic hold-out defensive lineman J.T. Tuimoloau, as well.

Ohio State has approved 51 official visits just in the month of June, roughly around the number that it takes in a full recruiting cycle according to director of player personnel Mark Pantoni. Countless more players will take advantage of what director of on campus recruiting Erin Dunston described as “kind of like an open door” policy regarding unofficial visits.

“If they come to camp and they want to unofficially visit, they can have that,” Dunston said. “If they’re coming to see their coaches and get a campus tour they can do that as well. I don’t want to (underestimate or overestimate the unofficial visitors total) but on my calendar right now it’s about 150-200 kids.”

The first players through the door, however, will be familiar faces for the Buckeyes. That serves as both a reward for their patience and loyalty, and a benefit for Ohio State, which wants to get its “best recruiters” on campus as soon as possible to make an impact on the uncommitted prospects.

“We discussed (spreading the visits out) as a staff and we just felt like, because they’ve been so loyal to us, we wanted them to get here that first weekend,” Pantoni said. “They deserve it. They deserve to all be here together, get to know each other. They are our best recruiters too, them along with our current players.

“I know some of the local guys will come back other weekends and help, but it was our decision to get them all here that first weekend if they could make it.”

These visits are going to look a little bit different than they usually do, for obvious reasons. Firstly, Ohio State plans to deploy a hybrid model for the visits according to Dunston. On-campus visits are obviously the focus, and Ohio State will be providing more tours and trips around Columbus than any reasonable person could even imagine, but the innovations forced by the pandemic aren’t going away, either. The Buckeyes became very comfortable with recruiting over video messaging platforms like Zoom or Skype during the last 15 months and plans to get kids involved both online and in-person to ensure engagement with as many prospects as possible.

“With about 14 months of not having kids on campus, we’re doing something a little bit different where it’s almost like a hybrid,” Dunston said. “We’re utilizing Zoom and having the kids back on campus. That transition really helps us to ease back into it.”

Those Zoom calls can be valuable, but Pantoni alluded to a Brian Hartline-ism when describing the limitations of a virtual visit and of recruiting exclusively online, comparing it to the difference between seeing a fancy car and actually driving it.

“When you’re constantly doing zoom, you’re kind of limited on what you can come up with,” Pantoni said. “(It’s like wide receivers coach Brian Hartline says,) it’s cool when you see the commercial of the nice, flashy car, but you don’t really know until you test drive it how cool it really is. That’s what we’re about to do. These kids are about to test drive the car, finally, after seeing the commercial for so many months.”

For the kids that do make trips to campus, there are plenty of ground rules. Though COVID restrictions have loosened significantly, recruits are still being asked to distance in at least a few ways. Firstly, 2022 players on unofficial visits “can come workout for one hour with one coach… there are no wide receivers running routes together, there are no one-on-ones, it’s just a workout with a coach” according to Pantoni. Players on official visits have no allowed time for workouts, and Ohio State will be using camps “mostly for the 2023 and 2024 kids to get that early evaluation on them.”

All of this paints a pretty clear picture of what Ohio State has on deck for June. It could be the most chaotic month that Pantoni has encountered during his time as a recruiting coordinator. The class of 2022 has been at a standstill for months for most schools, as kids wait to see their recruiters in person, rather than flying blind as those in the class that preceded them had to. This time is crucial for the Buckeyes and Pantoni’s staff, and he’s the first to admit that his calendar is packed for the entire month of June. His plans for July, however?