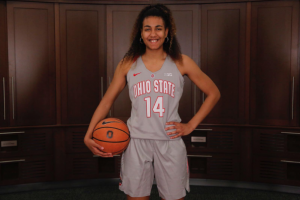 After the Ohio State women’s basketball team added two graduate transfers earlier in the week, the Buckeyes continued their roster reload Wednesday with another commitment in the 2018 recruiting class.

But this time it came from an incoming freshman.

Barcelona, Spain, four-star Aixa Wone chose OSU over Missouri after she visited both schools in the last week of April.

Rated by ProspectsNation.com as the No. 15 international recruit, Wone will join Ohio State after she plays within the Spanish national team system at the FIBA U18 Women’s European Championship from Aug. 4-12 in Udine, Italy.

In the pipeline for Spain over the past couple of years, the 6-2 forward averaged 7.3 points and 20.0 minutes across seven games at the 2017 FIBA U18 Women’s European Championship from Aug. 5-13 in Sopron, Hungary.

Between the influx of graduate transfers and incoming freshmen, OSU’s roster for the 2018-19 season currently projects to feature eight new players.

Assuming the Buckeyes keep Cronin and Jayaraman on scholarships, they have 13 scholarship players for next season. The NCAA-mandated limit of 15 scholarships means OSU has two more open.

One of those could go to Chelsea Mitchell, who would be a fifth-year senior, but her status for next year remains unclear. A team spokesperson told BSB in March that the forward mutually left the team early last season due to academic reasons.