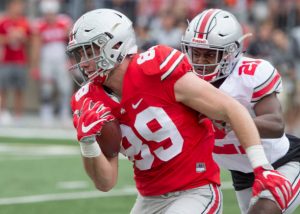 Ahead of the 2018 season, Ohio State enters with a handful of tight ends in the mix to replace a departed two-year starter in the graduated Marcus Baugh.

Among the Buckeyes in contention to step up, third-year sophomore Luke Farrell left OSU’s spring camp as a starter in the eyes of head coach Urban Meyer.

As he heads into fall camp with the momentum to take over, Friday found Farrell with 63 others on the preseason watch list for the John Mackey Award.

Given annually to the most outstanding collegiate tight end, the Mackey Award has been presented since 2000. The award winner will be voted on by the John Mackey Award Selection Committee, announced Dec. 5 and honored Dec. 6 at the Home Depot College Football Awards Red Carpet Show on ESPNU.

Ohio State signed Farrell from Perry, Ohio, as a four-star tight end in the 2016 recruiting class. The 6-6, 250-pounder enters his third year with the Buckeyes. After he sat out the 2016 season, Farrell made his OSU debut as a redshirt freshman in the 2017 campaign with two catches for 19 yards across eight games.