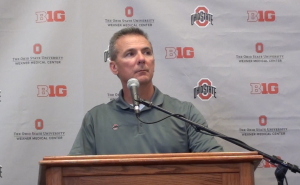 Ohio State’s first practice of fall camp, scheduled for Friday afternoon, will not be open to the media, a university spokesperson announced Thursday afternoon. The beginning of the practice session was originally scheduled to be open for media viewing, with interviews set to take place afterwards. All interviews have been cancelled for the time being as well, the statement said.

“The university is committed to supporting our student-athletes as they prepare for the upcoming semester,” the statement read. “Due to the ongoing investigation, football coaches and student-athletes will not be available for interviews until further notice and all practices will be closed.”

The spokesperson also noted that an update on future media opportunities was anticipated for Monday.

Offensive coordinator and quarterbacks coach Ryan Day is serving as the team’s acting head coach during the investigation.