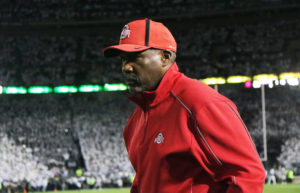 “Gene has been an invaluable member of our CFP selection committee,” Hancock said. “As a former football student-athlete, coach and now collegiate administrator, his influence is deeply appreciated. This is a significant time commitment, and we understand Gene’s need to focus on his primary responsibility on campus.”

Smith, who had one year left on his term with the CFP, said in a statement that he wanted to spend more time focused on the Buckeyes’ transition with new head football coach Ryan Day.

“Serving on this committee has been an honor,” Smith said. “Contributing to this great sport is always a privilege, and I will miss the time with my colleagues. It is imperative for me to have 100 percent focus in helping our new coach with his transition at The Ohio State University this fall.”

“I’m honored to be invited to work on the CFP selection committee,” Barta said. “I look forward to serving alongside the other 12 committee members. I’ve known many of the people involved for years and know they’re passionate about college football and have all demonstrated character and integrity throughout their careers.”