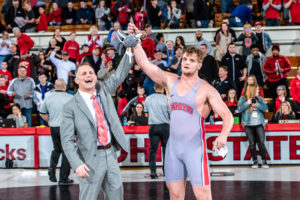 While the Ohio State football team goes through offseason workouts, the Olympic sport student-athletes donning scarlet and gray battle among the nation’s best across many different sports.

The Ohio State softball team and women’s gymnastics teams did not enjoy their normal success this past week, but many Buckeye teams and student-athletes shined in their respective competitions, particularly the dominant men’s tennis program. What follows are brief recaps of the events occurring in the past week with links to the press releases from Ohio State.

The No. 2 Ohio State wrestling team defeated Purdue handedly, becoming just the second team in 15 duals to hold the Boilermakers to one individual victory. The Buckeyes jumped out to a great start against Purdue, winning six straight matches to take a 24-0 lead before 12th-ranked Dylan Lydy scored at 174 pounds. The Scarlet and Gray rebounded and took the final three matchups, securing a 34-3 Big Ten triumph.

The No. 2 Buckeyes celebrated the seniors’ final home match with a 21-12 victory against No. 6 Nebraska at St. John Arena. Te’Shan Campbell, Joey McKenna, Micah Jordan and Myles Martin took the mat for their final time in front of the Buckeye crowd and St. John Arena hosted its last wrestling dual as the primary competition home of the Ohio State wrestling team.

For the Buckeyes, No. 6 Luke Pletcher, No. 3 Joey McKenna, No. 3 Micah Jordan, No. 1 Myles Martin, No. 2 Kollin Moore and No. 18 Chase Singletary defeated Jevon Parrish, Chad Red, Jordan Shearer, No. 4 Taylor Venz, No. 11 Eric Schultz and No. 7 David Jensen, respectively.

Redshirt freshman left-handed pitcher Seth Lonsway made his collegiate debut and led the Ohio State baseball team to a 4-3 victory against Seton Hall. The southpaw struck out nine and only allowed three hits and one run across six innings. The Buckeyes came away victorious on Opening Day for the sixth consecutive season.

The juniors led the way for the Scarlet and Gray at the plate. Junior right fielder Dominic Canzone hit a solo home run in the bottom of the fifth inning and scored two runs altogether. Junior first baseman Conner Pohl laced a two-run double down the right field line in the bottom of the sixth. Junior shortstop Noah West also made his presence felt at the plate, hitting 3 for 4 with a double and one run scored.

Freshman right-handed pitcher Garrett Burhenn made his collegiate debut in game 2, throwing eight scoreless innings in a 6-0 victory against Seton Hall. The Indianapolis native struck out six, while allowing just one hit and zero walks.

Pohl drove in the Buckeyes’ first run with a sacrifice fly. Brady Cherry doubled the Ohio State lead with a long ball into the woods beyond the fence in left-center field in the bottom of the sixth. Sophomore catcher Brent Todys extended the Buckeye lead to 3-0 in the bottom of the seventh with an RBI double. Then, West blasted a two-run home run to dead center in the eighth. Senior outfielder Malik Jones pushed the lead to 6-0 with an RBI single to score freshman infielder Marcus Ernst, who had doubled for his first collegiate hit.

The No. 2 Ohio State men’s tennis team defeated the No. 5 USC, 5-0, at the OSU Varsity Tennis Center on Feb. 12. The Buckeyes won the doubles point for the ninth consecutive match to start the season with big-time outings by John McNally, Hunter Tubert, Alex Kobelt and James Trotter.

The Buckeyes began their ITA National Indoor Championship appearance with a 4-0 win against No. 19 Tulane on Feb. 15. Once again, big performances from Wolf, Martin Joyce, McNally and Tubert gave Ohio State the lead through doubles play. Singles play did not take long to conclude as Wolf, Tubert and Kobelt secured wins in the second set of each of their matches. Wolf gave the Buckeyes a 2-0 advantage and was followed by Tubert and Kobelt, respectively.

Ohio State topped No. 13 Virginia, 4-0, on Feb. 16 to advance to the semifinals of the ITA Indoor Team National Championship at the Midtown Athletic Club in Chicago. The Buckeyes took the doubles point to open the match. McNally and Tubert won four games in a row to take their match, 6-2.

The Buckeyes defeated No. 4/6 Texas, 4-0, on Feb. 17 to advance to the finals of the ITA National Indoor Team Championship. After taking a 1-0 lead through thrilling battles in doubles play, Ohio State was superb in singles play. Wolf defeated No. 6 Christian Sigsgaard in two sets, and was followed by Tubert, who continued his dominance. Then, McNally locked up the win, defeating Yuya Ito, 7-5, 6-3.

“Last year was heartbreaking, we came up just short,” McNally said. “We have worked so hard to get back here to have this opportunity. The match is just another opportunity for us to represent our unbelievable university.”

The Ohio State men’s volleyball team fell to Lindenwood (5-9, 1-3 MIVA) and its high-powered offense in a 25-23, 25-19, 25-17 conference win for the Lions. Lindenwood posted a .462 hitting percentage with just seven errors in an efficient victory against the visiting Buckeyes. Freshman Jack Stevens led Ohio State with nine kills in his first career start.

The No. 13 Ohio State men’s lacrosse team (3-0) took an 11-7 victory against Massachusetts (0-2) at Garber Field, marking the Buckeyes’ first-ever win at the venue. The Buckeyes won behind a 17-save performance by Josh Kirson and the four-goal output of Tre Leclaire.

Men’s and Women’s Track and Field

The Ohio State men’s and women’s track teams hosted their only home meet of the 2019 indoor season Feb. 16, taking gold medals in 12 events altogether. The women’s distance medley relay team of Abby Nichols, Karrington Winters, Annie Ubbing and Julia Rizk shattered the Ohio State school record with a time of 11:02.12, which ranks No. 12 in the nation.

The Ohio State swimming and diving team started off the championship season with several personal-best times on Feb. 16 at the McCorkle Aquatic Pavilion. Sophomore Laura Banks and freshman Hudson McDaniel both posted times fast enough to qualify as NCAA “B” Cuts in the 100 Breaststroke. The Buckeyes finished the night with eight first-place finishes.

The Buckeyes added to the eight gold medals won on Feb. 16 with seven more first-place finishes on Feb. 17. Ohio State swimmers combined to break 15 personal records. Freshman Joe Pohlmann earned an NCAA “B” Cut in the 50 Free, clocking in at 19.87, also marking a personal best.

The Ohio State softball team fell 3-1 against No. 1 Florida State to open the St. Pete/Clearwater Elite Invitational on Feb. 15.

The Buckeyes lost 7-2 against No. 7 LSU on the morning of Feb. 16, but bounced back with an offensive explosion in a 10-2 five-inning win against Utah.

The Ohio State softball team (4-4) could not muster enough runs in a battle with Notre Dame (4-6), falling 3-2 on its final day in the St. Pete/Clearwater Elite Invitational.