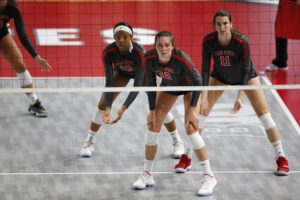 With another week in the bag, Ohio State’s Olympic fall sports are really starting to take shape. Both soccer teams are getting some footing, field hockey appears to be a top-20 team once again, Volleyball is back on track after a tough start, and women’s golf is among the middle of the pack to begin its year. On the week, the Buckeyes went 5-3.

After a challenging start to the season that saw the Buckeyes start off 4-5, Ohio State’s volleyball team rattled off four wins this past week and won the Dayton invitational in the process. The run started on Thursday with a 3-1 win over Miami, continued into Friday, 3-0 over Illinois State and concluded later that day, 3-1 against Dayton to secure the Buckeye Invite title.

Ohio State plays next against Maryland on Wednesday, Sept. 25.

For the second straight week, field hockey dropped a tough game against a good team. Last week, the loss came to Louisville, 2-1. This week, No. 11 Northwestern delivered the blow, 4-1.

“Northwestern deserved the win,” Martin said. “We started off slow and didn’t show the intensity we needed to succeed and that needs to change tomorrow at practice. We have good pieces and will keep working to build those together. With the rest of the weekend off, we have a couple days to focus on Ohio State Field Hockey and get better.”

The Buckeyes next take the field next on Sept. 27 against Iowa.

The women’s soccer team got off to a tough start, thanks in large part to a difficult schedule, but they seem to be back on track following a 1-0 win over Michigan State on Thursday night. With Kayla Fischer leading the way on the lone goal, Ohio State took over late and never looked back.

Unfortunately, that momentum wasn’t quite able to continue, as Ohio State dropped a game on Sunday to Michigan, 2-1.

“I thought we were fantastic in the first half,” Ohio State head coach Lori Walker-Hock said. “We had the ball. We created opportunities. Then in the second half, we just kept giving the ball away and you can’t keep giving the ball to a team that loves to possess. We had to continue to chase because we weren’t able to control possession. We just have to clean some things up, play faster and communicate better.”

Ohio State takes the field next, sitting at 3-4-1, on Friday against Wisconsin.

Like the women’s team, the men’s soccer team had its winning streak snapped, but still had a good week, overall. The week started with a 2-0 win over South Florida, and while an overtime defeat against Penn State, 2-1, is disappointing for the Buckeyes, they still sit at 5-2 on the season.

They take the field next against West Virginia on Tuesday.

The women’s golf season got off to a bit of a rough start in the first invitational of the season, the Intverness Women’s Collegiate. In day one, on Monday, Ohio State finished No. 10 out of 13 teams, and while it bounced up to eighth on day two, it was still a bit of a slow start to the season.

“I’m encouraged after seeing our team get better,” Ohio State director of golf Therese Hession said. “We certainly had it going today and couldn’t quite finish it off but it was a good way to start the season. We did some things very well but there’s also a lot for us to improve on.”

The Buckeyes will next tee off on Sept. 30 in the Windy City Collegiate.