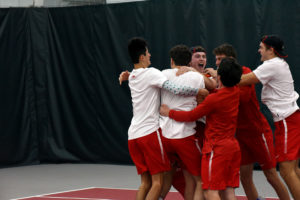 Ohio State had several Olympic teams securing major wins over the past week as Buckeye teams enter further into the winter season, with both tennis teams, women’s hockey and men’s volleyball all putting up spotless performances, while the rest of the Olympic teams helped contribute to a strong, 7-3 record on the week.

The women’s team kicked off the loaded weekend on Jan. 31, with a 4-2 win in Columbus over No. 5 Duke to improve to a strong 3-0 start. The Buckeyes have now beaten top 10 teams in each of the last two weeks, with a win over then-No. 10 Oklahoma State already in the books from the ITA Kickoff.

Ohio State started strong, winning the doubles point and jumping to a 3-0 lead, before a Duke comeback put the lead in some jeopardy. With Duke on the precipice of completing the comeback, Ohio State’s Danielle Wolf toppled Yasmine Mansouri 7-5 in a third-set tiebreak to secure the victory for the Buckeyes.

“Duke is a great team and we certainly didn’t expect to walk out of here 4-0 in an hour and 45 minutes. That wasn’t part of the gameplan,” said Ohio State head coach Melissa Schaub. “We got five first sets and like good players do, Duke came back and played well in the second sets. I think we started looking at the scoreboard a little bit and got a little anxious waiting for Irina to finish it. And then when that didn’t happen, we got in a little bit of a hole on some courts. But we came back and showed some great fight. Shiori is playing some great tennis and I’d put Danielle Wolf up against anyone in the country right now. She works incredibly hard and deserved to finish it off tonight.”

Meanwhile, a day later, the men’s team shook the college tennis world with a 4-1 victory for the No. 6 Buckeyes over No. 1 Texas. The win extended Ohio State’s home win streak to 88 games, and improved its home win record since April of 2003 to 288-1.

Buckeye freshman Robert Cash clinched the win for the Buckeyes with a 6-4,6-3 victory over Chih Chi Huang, along with a doubles win with partner John McNally over Christian Sigsgaard/ Yuya Ito, 6-4 .

Ohio State continued its good run of form, improving to 7-1-1 in the last nine games after a win and tie against conference foe Bemidji State over the weekend. The tie came in the second of two matchups, with Jincy Dunne and Emma Maltais finding the back of the net for the Buckeyes in a 2-2 draw. Maltais put Ohio State ahead in the final frame, but the Buckeyes couldn’t prevent overtime, where the teams remained in stalemate, recording the game as a tie. However, Ohio State claimed the extra league point with a shootout win, as Maltais delivered another goal.

“I’m proud of our girls and I thought that they were the more dominant team, and sometimes the score just doesn’t depict how the game really looked,” said head coach Nadine Muzerall. “In the second period we really controlled the game but we were missing some shots that should have been on net. Overall I just think we played a fantastic game. Lynsey Wallace was unbelievable and made some huge saves.”

The first game was a 7-2 blowout win. Gabby Rosenthal scored two goals, Maltais added one of her own, joined by Sophie Jaques, Liz Schepers, Brooke Bink and Paetyn Levis.

The Buckeyes match up with Minnesota Duluth in the next weekend series, entering the two-game battle at 17-6-5 and looking like one of the nation’s strongest teams.

Ohio State took an expected step forward with a 43-3 win over Maryland on Jan. 31, but couldn’t sustain the momentum, falling in the final seconds at No. 6 Nebraska two days later, 19-15. The Buckeyes now sit at 9-3 on the season, with Northwestern and Penn State left on the duals schedule before a lengthy break leading up to the Big Ten Championships.

Ohio State snagged its first road win of the season over Saint Francis in straight sets on Jan. 31.  Reese Devilbiss carried the largest offensive load, connecting for 12 kills at a .688 attacking rate.

The Buckeyes kept the good times rolling on Feb. 1 with another sweep, though this one came in a bit more impressive fashion, because it came against the No. 7 team in the country, Penn State, on the road. The win moved Ohio State to 8-1 on the year, and served as its first sweep at Penn State since 2013.

Devilbiss had 15 kills at a .560 attacking rate, while Martin Lallemand put up 11 kills and 10 digs and a .435 hitting percentage.

The Buckeyes come back to the Covelli Center on Feb. 7 to take on UCSB.

After a week off, Ohio State will take the pool again on Feb. 14 at the Ohio State Winter Invitational.

The Ohio State men’s team recorded five top-eight finishes at the Texas Tech Invitational, while the women’s team put up six, along with a new school record in the pentathlon.

The Buckeyes will next compete in the Tiger Paw Invite hosted by Clemson University.

“I’m very proud of the team and I think the work we have been doing during the week is starting to pay off,” Rustam Sharipov, Ohio State head coach, said. “At the end of the day, on the last two events we lost our focus and I think that is what we need to work on. Other than that, I am very proud of the team and I believe we are moving in the right direction. Now, back to grinding and getting ready for next week’s meet.”

The men will next matchup with Arizona State, Cal and Stanford on Feb. 8, while the women have another dual, this time against Michigan, on Feb. 9.